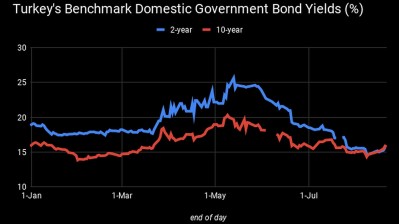 The Turkish Treasury held four domestic debt auctions on August 19-20 as it completed its scheduled auctions for the month having raised a total of TRY8.4bn ($1.7bn) versus its planned borrowing target of TRY6.5bn.

The domestic debt rollover ratio was registered at 95% for August, higher than the 73% target, Is Invest said on August 21 in its daily bulletin.

The costs of zero-coupon bills and 5-year CPI-indexed bonds fell compared to the rates obtained in the July auctions, while the 2-year lease certificate cost also compared lower than the rate seen in the last auction held for identical paper, back in June.

From May 17 to August 2, foreign investors’ net domestic government bond acquisitions amounted to $464mn, but total outflows still stood at $2.24bn for the year to date, according to the latest data from the Turkish central bank.

According to latest data out of the finance ministry, non-residents’ share in the government’s domestic debt stock rose to 11%, or TRY83.1bn, in July from 10.8%, or TRY79.4bn, as of June. Foreigners' share has gradually declined, moving down from 19% in April 2018 to 10% in May this year.