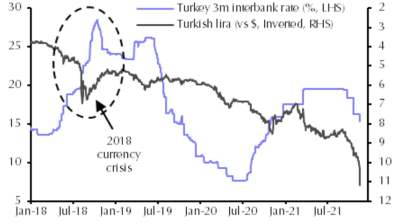 The fresh falls in the Turkish lira following the Central Bank of the Republic of Turkey’s (CBRT’s) interest rate cut on November 18 “have left Turkey firmly in crisis territory” and echoes of previous “sudden stops” during major emerging market currency crises in the past are growing louder, Capital Economics has advised investors.

“Without an aggressive policy response, there is a real risk of large and destabilising falls in the lira of more than 10%, with the currency bursting through 13/$ in the coming days,” said Liam Peach, an EM economist at Capital.

The fallout from the 100bp interest rate cut intensified an hour or two after the rates meeting as the Turkish lira (TRY) briefly fell by 6% against the dollar on the start of the day to 11.3/$. In late evening trading, it clawed back to 10.98/$, but the fall in the currency since the end of last week of 12% is in the region of similar moves during previous periods of crisis in Turkey.

Added Peach: “Policymakers have been silent and the plunge in the lira is now way beyond the scale which has, in the past, prompted the CBRT to raise interest rates (e.g. in 2018). With the CBRT’s communications today leaving the door open for another rate cut in December and President Recep Tayyip Erdogan piling on the pressure for looser policy yesterday, there’s little reason to argue against further large falls in the lira in the near term.”

On the political front, with the lira already in trouble on the eve of the rates decision, Turkey’s main opposition Republican People’s Party called on Erdogan to announce a snap election, with its leader Kemal Kilicdaroglu saying: “You [Erdogan] cannot govern the country; it’s a pity. Call elections as soon as possible, let a new government come into office and govern the country properly."

Another opposition party, IYI, joined the call. IYI leader Meral Aksener said: "There is no solution other than elections. The end is near now. I read the report on further destruction, poverty, impoverishment and education submitted to the Education Policies Commission and sent to me by a fellow expert. Impoverishment alongside poverty..."

“Sudden stops” with destabilising falls in the currency and abrupt halts to capital flows have been seen during major EM crises in the past such as in Turkey in 2018, Russia in 2014 and Ukraine in 2015. In those crises, said Peach, currencies fell by an average of 10% against the dollar in the week before the sudden stop (the lira fell 7% last week) and plummeted by 25-30% in the week of the sudden stop as sentiment evaporated (the lira is down by 12% in the past week). “A sharp fall in the lira of another 10-15%, bursting through 13/$, would not be out of the question in the coming days,” the economist added.

He concluded: “Such a sharp depreciation pushes currencies beyond their fair value and is often followed by a rally on the back of an aggressive policy response – the lira, ruble and hryvnia appreciated by an average of 10% one month after the sudden stop and 20% after three months. But the extent of any rally clearly depends on the credibility of that response.

“There are serious concerns about pressure from President Erdogan and genuine reasons to worry that policymakers will not act to shore up the lira.”

Jason Tuvey, senior EM economist at Capital, said in a note that “the CBRT is running the risk of creating a self-fulfilling cycle whereby its unwillingness to tighten policy prompts a further sell-off of Turkish assets (including the lira), raising inflation expectations and further increasing demands for higher interest rates. Even if the central bank does halt its easing cycle after December’s meeting, there’s no guarantee that this would soothe investors if [CBRT] Governor [Sahap] Kavcioglu were to be subsequently sacked for defying the president’s wishes.”

Following the rate hike, Timothy Ash, an EM sovereign strategist at BlueBay Asset Management, wrote on Twitter: “Think we are now in WTF territory. Someone needs to tap RTE [Recep Tayyip Erdogan] on the shoulder + say hey boss, you got it wrong, we need to go back to control settings IR hikes.”

Ash also described the rate cut as “literally insane” and, in a reference to Turkey’s 2018 currency crisis, added: “Feels very 2018. Erdogan is now like King Canute pushing back against the lira tide as it inevitably washes over him.”

Rampant inflation has already eaten into household incomes, while more expensive credit will tighten wallets. The question is how deep the slowdown will be.

Poland expected to avoid hard landing
4 hours ago
Anthems of victory: How Ukraine is winning the online culture war
3 days ago
Western sanctions block $16bn-$18bn worth of Belarusian exports
4 days ago
Just another day in Ukraine's hell
4 days ago
Turkmenistan: Car and beauty bans further erode women’s rights
5 days ago