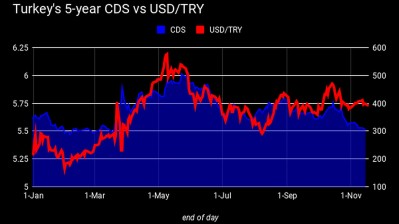 The European Bank of Reconstruction and Development (EBRD) has bought $90mn worth of 5-year eurobonds in a $600mn auction held by Turkey’s Mersin International Port (MIP) with the objective of “helping to attract a host of investors, despite a challenging market environment in Turkey”, the development bank said on November 15.

It’s a world of opinions of course, but there’s a solid case to be made that anyone attracting investors into the country right now should actually be warning that behind-the-official-shop-window potential economic, political and social collapses are under way and more than fingers may eventually be burnt. This column has for quite a while been pointing to less-than-logical reactions seen on the Turkish eurobond and credit default swap (CDS) markets to ‘Erdoganomics’. Since September, Turkey’s CDS rates have fallen by 100 bp while its eurobonds have gained across the curve along with falling official inflation and a Turkish lira that has been strengthening with ‘He that shall be obeyed’ directing monetary policy to sharply cut interest rates and fuel the supply of lira via government banks. Even the Syria offensive eventuated in just a temporary effect on the CDS rates and the spread over US Treasury paper fell sharply to 407 bp in the Turkish Treasury’s 5-year eurobond auction held on November 14 from the 470 bp seen at the previous sale held in July.

On November 16, Kerim Rota, a former Turkish banker, clearly just trying to be helpful given some pro-regime rumbling lately set off by indiscretions, explained in his column for Para Analiz possible methods for manipulating the CDS market.

“The continued financing of existing investments is crucial for [MIP’s] ability to run operations smoothly and pursue further growth,” the EBRD noted in its press release. As well it might.

The EBRD has invested a total of €11.5bn in Turkey since 2009, while strongman president Recep Tayyip Erdogan has built his regime apace, throwing angry rhetoric at European impertinence in questioning his democratic and human rights credentials (and, of late, his market economy credentials) all the while.

Some 85% of Turkish international trade is seaborne and Mersin Port serves as the gateway for Turkish industry and agriculture to the Middle East, according to the EBRD.

A statement on price guidance was awaited from MIP but a Reuters report suggested on November 7 that the initial price guidance for its 5-year eurobond was set at more than 5%.

It was reported on October 18 that flag carrier Turkish Airlines had mandated lenders for eurobonds or Enhanced Equipment Trust Certificates. However, nothing has been heard of the move since then.

Last week, Istanbul mayor Ekrem Imamoglu, a newcomer to global finance circles, was in London to test waters for a $500mn eurobond sale.

On November 8, government-run Vakifbank received approval from the Turkish capital markets board (SPK) to issue €1bn worth of mortgage-backed securities abroad.

On November 18, private lender Yapi Kredi said in a stock exchange filing that it cut the issuance limit for its mortgage-backed eurobonds, already approved by the SPK, to €500mn from €1bn.

During autumn last year, the government “encouraged” local pension funds to buy local lenders’ mortgage-backed securities, but it seems that the Erdogan administration is currently showing local banks the external door for turning their mortgage loans into cash.

The level of foreign interest in the mortgage-backed eurobond auctions in the making is awaited with a good deal of curiosity but how many of the buyers will have ‘moustaches’ (Turks buying via foreign entities) or what the source of capital will be are questions that remain unanswered given “confidentiality” dogma, which appears to be more steadfast than the law of gravity.

The activity of eurobond issuers across the Emerging Europe, EMEA and Eurasia regions has been, meanwhile, rising since last month, perhaps implying an expectation that ‘magic money trees’ will again start bearing the goodies thanks to the latest Fed easing cycle driven by the irascible Donald Trump, who’s always finding a way to get his way.

“Emerging markets issuers are pumping out mandates, with the buy-side showing little sign yet of closing shop for the year, but investors are not throwing cash at everything,” Capital Economics said on November 13 in an analysis entitled “EM conditions still welcoming for issuers but slip-ups are a danger”.

Given that Trump’s “favourite dictator”, namely Egyptian coup leader Abdel Fattah el-Sisi, recognised as the president of his country by the “civilised” world with hardly a pause for reflection, sold $2bn worth of paper last week, “investors [who] are not throwing cash at everything” might perhaps demur should Islamic State’s new leader decide a eurobond is the way to go.

But now for a final headline from the Turkish government’s ongoing economic “transformation” in the wake of the post-currency-crisis “rebalancing”. November 15 brought news that a third economically distressed family has collectively committed suicide using cyanide.

Individual suicides, people on the roof of the Turkish parliament or those who set themselves alight and unpaid construction workers plunging from cranes are common occurrences nowadays that no longer carry any news value.

Meanwhile, Robin Brooks of the Institute of International Finance (IIF) is to depart his planet to this week head to one of his “favorite places on the planet—Turkey”.

“This week I'll be heading to one of my favorite places on the planet—Turkey—to participate in the Turkish Capital Markets Summit, where I plan to talk about growth momentum, the latest credit expansion and what all this means for Turkish Lira and our $/TRY fair value of 5.50,” Brooks wrote on November 17 in a tweet.

Brooks often gets the nod of approval from the Turkish government and the Erdogan media thanks to his Teflon-fair-value for the USD/TRY rate. He will no doubt advise those unruly Turks at the summit not to boost lending for synthetic growth but this advice is headed straight for the trash can, of that you can be sure—Dilek Gungor, the latest top gunswinger in Erdogan’s Pelican gang, warned on November 16 in her column for daily Sabah, which happens to be directed by finance minister and Erdogan son-in-law Berat Albayrak’s brother, that private lenders were stalling on the government’s “advice” (and officials expect the dutiful to know that this is trash-can-proof “advice”) to boost lending.

Brooks, along with Timothy Ash of Bluebay Asset Management, was in Turkey prior to the March 31 local elections to attend the Uludag Economy Summit. There, they called on the Turks to make a clear return to the Western fold. That was before S-400 missiles arrived from the Kremlin for deployment in Turkey.

Brooks has stuck to his Teflon-fair-value estimate since then but Ash has been variously praising and hitting out at the track taken by the Turkish government. The problem with the stick and carrot where populists are concerned is that they don’t just see a stick and a carrot, they also see a fake stick and a fake carrot, and they are not to be told which is which.

Gungor, meanwhile, on November 8 remained a good little troll. Those reporting the collective family suicides were “creating a perception”, she said. Got that?

In a previous column, Gungor on November 6 heralded coming legislation delivering jail sentences for those who “create perceptions” of the Turkish economy. It’s good to know.

The global finance industry was never built to give a proper damn about tinpot tyrants. They’re welcome to do business for as long as it’s possible to look away. Perhaps the emerging new world order will mean it’s permanently possible to look away or will everything get a fair bit messier than that? One thing’s for certain, seeing business as usual in this ghastly present-day Turkey takes your breath away.

There is an old Turkish adage. Let’s see if it translates. “The bitch combs his hair while the neighbourhood is burning.” Although some of those we have in mind do not have any hair left to comb.