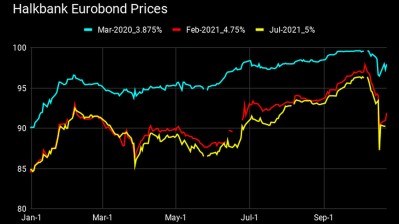 Fitch Ratings has moved Turkey’s state-run Halkbank to Rating Watch Negative (RWN) following last week’s announcement that the lender has been indicted for fraud, money laundering and Iran sanctions offences by the US attorney general for the Southern District of New York (SDNY).

The RWN may be maintained for longer than six months if the US investigations extend to a considerable period of time, Fitch also said. Halkbank is now seen as “fugitive” by New York prosecutors as it failed to send a lawyer to an initial hearing in a Manhattan federal court on the case brought by the SDNY.

On October 18, Moody’s Rating Services announced a similar action to that now taken by Fitch by placing the bank on review for a downgrade.

The market consensus forecast for the Q2 net profit was TRY316mn. A TRY385mn cut in provisions limited loss of profitability in the quarter.

Loans grew by 18% year-to-date to TRY287bn while the non-performing loans (NPLs) ratio rose to 4% due to a TRY1.5bn energy sector loan. Total assets amounted to TRY429bn and deposits stood at TRY267bn at end-June. Net profit declined by 68% y/y to TRY615mn in H1.

Given that the Halkbank indictment seemed to arrive out of nowhere amid the bipartisan displeasure at Turkey’s military offensive in Syria, as well as the Donald Trump “betrayal” of the US-allied Kurds that cleared the way for the incursion, the court case is widely viewed as politically motivated. However, it is not known whether Trump was informed prior to the filing of the indictment.

Also open to speculation is whether Trump might try stalling any moves that could result in fines or sanctions against Halkbank. This is a matter of great interest as Trump’s involvement in the Halkbank affair is being scrutinised by US media. In 2017, Trump reportedly urged then-secretary of state Rex Tillerson to convince the US Department of Justice to drop charges against a client of ex-New York mayor and lawyer Rudy Giuliani—namely Reza Zarrab, an Iranian-Turkish gold trader and smuggler who was charged with evading US sanctions on Iran partly by using Halkbank as a channel.

Where the Halkbank court case in Manhattan goes from here will be closely watched in Turkey—most Turks assume that the judicial process will be shaped by the domestic political struggles in the US and also the direction of US-Turkey relations including the personal relations between Turkish President Recep Tayyip Erdogan and Trump.

Accused in open court
As a result of the investigation into Zarrab and a subsequent court case which resulted in a sanctions conspiracy conviction of former Halkbank deputy manager for international banking Mehmet Hakan Attilla, Erdogan has been accused in open court of having had knowledge of the sanctions-busting scheme. Meanwhile, the SDNY indictment includes a reference to the participation of a “relative of the then-Prime Minister [Erdogan] who held multiple Turkish cabinet positions”.

The brief description appears to point to then Turkish energy minister and present finance minister Berat Albayrak, who is Erdogan’s son-in-law.

The Halkbank case became a big affair in Turkey back in December 2013 before attention switched to the moves made by prosecutors in New York. It was then that Turkish public prosecutor Celal Kara—who is himself currently a fugitive sought for trials centred on what the Erdogan administration describes as the Fethullahist Terrorist Organization (FETO)—abruptly one morning ordered the detention of dozens of people, including then Halkbank general manager Suleyman Aslan and Zarrab, along with the sons of some ministers in the cabinet of Erdogan, who was at that time prime minister.

Erdogan took the investigation as a direct threat to himself and his family after tapes of his phone calls with some family members were leaked day by day in something of a soap opera. Rows between Erdogan with then-ally Fethullah Gulen—a preacher now self-exiled in Pennsylvania who the Turkish strongman paints as a devious enemy—turned into a public war.

Erdogan by now can claim to have won his war against Gulen, particularly by using the failed so-called Gulenist coup attempt in July 2016 as leverage, but the Halkbank case bubbled back to the surface in the US after the arrest of Zarrab in Miami in March 2016, where the smuggler arrived with his family for a vacation.

It was in March 2017 that Atilla was arrested when he turned up in the US for a roadshow. In November 2017, Zarrab turned state witness, ‘the US vs Zarrab’ case was dropped and the smuggler served as a witness for the prosecution in ‘the US vs Atilla’ case.

Zarrab explained the sanctions evasion scheme in detail during the court hearings and the Turks had their soap opera back. It made for ‘great viewing’ as Erdogan vehemently denied in public that the criminal adventures were anything to do with him. But Zarrab pointed the finger directly at the Turkish leader, telling the court that he was told in 2012 by then economy minister Zafer Caglayan that then-PM Erdogan had instructed Turkish banks to participate in the multi-billion dollar scheme. Judge Richard Berman, however, did not dig into this particular issue.

‘The US vs Halkbank’ case has been awaited ever since ‘the US vs Atilla’ case concluded with the jailing of Atilla, but it does appear that Erdogan successfully managed to stall it thanks to his personal bond with Trump. The indictment may well have taken Erdogan entirely by surprise. In discussing it with reporters in Ankara he stated that it was “supposedly closed”.

One twist that certainly came out of the blue for followers of the affair came arrived on October 21 when finance minister Albayrak announced that Atilla—who served a prison sentence in the US from March 2017 to July this year—had been appointed as the director general of Borsa Istanbul.

On October 22, Halkbank’s US lawyer did not attend the first hearing on the indictment of the bank held in a federal court in Manhattan.

US District Judge Richard Berman, who sentenced Atilla after ‘the US vs. Atilla’ trial, gave the bank another two weeks to respond to the prosecutors’ summons. After that period is up, he will decide on whether to impose sanctions, Adam Klasfeld of Courthouse News, who became popular in Turkey with his reporting during the trial of Atilla and Zarrab, reported.

“I suppose that’s one way of integrating back into society someone who has been convicted of financial wrongdoing,” Judge Berman reportedly commented on Atilla’s appointment as head of the Istanbul stock exchange.

The prosecutors could switch to seeking a fine if Halkbank continues to refuse to attend the court hearings but such a fine would be a penalty only for failing to appear in court, it would not reflect a finding that the bank was guilty of the charges against it.

The US prosecutors claim that Halkbank participated in the illicit movement of about $20bn in Iranian oil revenue through the US financial system between 2012 and 2016.

Back in the banking arena, Halkbank, along with state-run peers Ziraat and Vakifbank, have been launching consecutive packages to boost loan growth as part of the government’s plans to open the credit taps to reboot Turkey’s humbled and ailed economy in the wake of the 2018 balance of payments crisis.

Both Halkbank and Vakifbank are listed on the Borsa Istanbul.

In response to the latest Halkbank indictment, the Borsa Istanbul temporarily prohibited short selling in banking shares within the BIST-30 Index, effective from October 16, within the scope of a decision taken by its chief executive. It said the shares affected were those of Halkbank, Akbank, Garanti Bank, Halkbank, Is Bank TSKB, Vakifbank and Yapi Kredi Bank.

The stock exchange also introduced a depositary restriction. The move restricted investors to only selling their holdings in the seven banks in question on receiving the shares two days after their purchase. It also introduced a requirement that shares in the banks only be sold via the brokerage houses holding the shares.

On October 21, the Borsa Istanbul administration removed the depositary and brokerage restrictions but the short-sales ban remained effective as of October 23.

Amid the tensions, the growing number of irregular measures are hurting the efficiency of Turkey’s financial markets. Analysts widely complain of incompetent fiscal and monetary policies pursued by the Erdogan administration, while the on-off threat of US sanctions and Halkbank indictment mean the Istanbul exchange stays in a roller-coaster mood, with liquidity still dry.

Green financing reached close to 50% of the EBRD’s volume of investment in 2019, but as he leaves the bank Chakrabati warns of the need to put the green economy at the heart of the post-COVID recovery.

With its launch scheduled for 2023, Siberia's Udokan copper deposit is among the largest in the world.

Letter to Putin exposes campaign against US investor Calvey