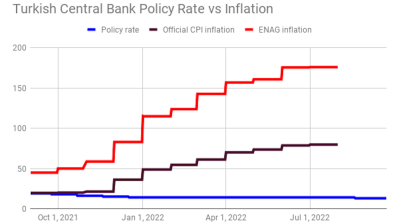 Turkey rediscovered its ‘Erdoganomic’ ability to shock the markets on August 18 as its central bank monetary policy committee (MPC) announced a cut in its policy rate by 100bp to 13% (chart).

The easing came despite the Turkish Statistical Institute (TUIK, or TurkStat) on August 3 posting official July consumer price index (CPI) inflation at a 24-year high of 79.6% and the independent Inflation Research Group (ENAG) contending that in reality inflation stands at 176%. Immediately after the rate cut was announced, the USD/Turkish lira (TRY) pair, which has been testing the 18-level for around a month, crashed through the 18/$ threshold towards 18.15. By end-of-business in Istanbul it had pared losses to around 18.05. The lira lost 44% against the USD last year and has shed towards a third of its value against the dollar in the year to date.

On July 28, the central bank increased its end-2022 annual inflation forecast to 60% from the 43% it predicted three months ago. Turkey’s five-year credit default swaps (CDS) have, meanwhile, risen above the 700-level, while the yield on the Turkish government’s 10-year eurobonds remains above the 10% level.

As things stand, with the populist authoritarian President Recep Tayyip Erdogan widely viewed as at the helm on monetary policy that flies in the face of orthodox economics, it is absolutely unknown what the MPC is capable of introducing at its next rate-setting meeting, set for September 22. Prior to the unveiled rate reduction, all 21 economists surveyed by Bloomberg said they expected no change from the 14% benchmark that had been in place since December.

Erdogan’s idiosyncratic unconventional economics and determination to turbo-charge growth continue to underwhelm top economists. The accompanying statement from the MPC on the reasoning behind its rate move, as per usual, was so full of routine inconsistencies it would struggle to win a high-school essay pass grade.

Critics say it is not possible to assign a logic to the rate cut from an economic perspective. The effectiveness of monetary transmission in Turkey is already deep in negative territory (when the policy rate goes down, the market rates go up, and vice versa).

In the past two weeks, monetary conditions were again easing. There was no need for a policy rate shock. But observers say the central bank really does not have any impact on the determination of the policy rate. Everything is handed down by the palace. Some statements are written by the national bank’s personnel. But the MPC members would appear to actually gather each month to drink coffee and chitchat.

As Selva Bahar Baziki, an economist, was cited as saying by Bloomberg Economics: “We see no economic motivation behind the decision and instead consider macroeconomic conditions as warranting a strong hike. The central bank, however, has opted for the preference of the political leadership to lower borrowing rates as it focuses on growth.”

The MPC made the case that it was responding to a potential slowdown in manufacturing rather than starting a monetary easing cycle, saying: “It is important that financial conditions remain supportive to preserve the growth momentum in industrial production and the positive trend in employment in a period of increasing uncertainties regarding global growth as well as escalating geopolitical risk.”

There is also the case that a rise of more than $15bn in Turkey’s gross foreign reserves over the last three weeks—attributed by officials to money transfers from Russia for the construction of the Akkuyu nuclear power plant—and, globally, falling interest rate expectations, may have emboldened the policy makers to bring in even more ultra-loose monetary policy. But in the end, Turkey’s monetary cycles are always identical. Lira loans are pumped in. The exchange rate becomes impossible to control. Backdoor tightening (or shock rate hikes during cycles prior to 2020) is introduced. More lira loans are pumped n.

It was in May that the palace administration decided there was no more FX left to keep the lira under control. Macroprudential measures and non-capital controls followed.

In July, the fresh lira loans flow slowed. Turkey’s “businessmen” were predictably in uproar. Then, across the last two weeks, the loan rates entered a downward trend and the loan flow escalated.

In the coming period, the lira will be more exposed to new losses. The external balances at the same time will deteriorate further in parallel to loan growth.

Under normal conditions, the trade deficit is deducted from GDP. However, Turkey has been reporting a positive contribution from external trade for around two decades.

In the coming period, the inflation dynamics will definitely deteriorate further. Even prior to the latest easing cycle, the lira was a clear candidate for a crash. Estimating the timing is, though, not possible.

August this year, often a month of economic turmoil, is still proceeding in an extremely positive fashion (as positive as possible amid the global tightening).

On September 21, the Fed’s open market committee is currently expected to deliver another 50bp rate hike.

By June 2023, Erdogan must stand for re-election. Expect more of the unexpected.