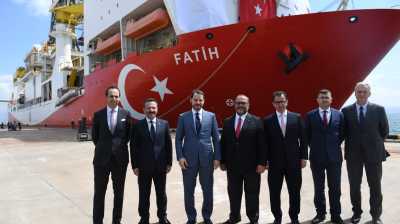 Turkey’s response to the EU’s introduction of sanctions over its drilling for gas in waters where Cyprus claims exclusive economic rights has included an announcement from its energy minister that Ankara will send a fourth ship to the eastern Mediterranean to conduct seismic research for hydrocarbons around the island.

Turkey currently has three ships around Cyprus, including two drilling ships. In a tweet, energy minister Fatih Donmez said seismic research vessel Oruc Reis would be dispatched to the Mediterranean after completing present activities in the Marmara Sea.

The provocative approach of Turkish President Recep Tayyip Erdogan and his officials to the EU sanctions and threats of imminent sanctions from the US over Ankara’s deployment of Russian S-400 missile defence systems has added to a sense among officials that the strongman leader, in trouble politically and economically, has decided he needs to contrive a constant ‘state of emergency’ in order to stay in power. In a column for Ahval—a media outlet that takes an anti-Erdogan line—Ilhan Tahir wrote on July 16: “Opposition parties appear to be gaining momentum, and cracks are appearing within Erdogan’s [AKP] party as renegade former allies are looking to form their own entities that could split his constituency. Erdogan has no hope to offer and no economic policies to heal the deep economic damage the country has endured. Erdogan's political life as a problem solver appears to have come to an end. The only way for Erdoğan to survive is to convince Turkey's citizens, including Kurds and other minorities, that the only options in front of them are ‘Tayyip or we burn the country’”.

Tahir’s piece also observed that Erdogan, who last week fired his central bank governor after demands for interest rate cuts were not met, was building up its forces along its border with Syria in possible preparation for an offensive into the northeast of the wartorn neighbour, where US troops are stationed. An incursion could come as a response to any approved US sanctions.

Cavusoglu not taking sanctions “seriously”
Responding to the EU sanctions, Turkish Foreign Minister Mevlut Cavusoglu said on July 15 that there was no need to take very seriously decisions made by the bloc to curb contacts and funding for Ankara over its drilling for gas and oil off Cyprus. "There is no need to take it very seriously. These are simple things. These aren't things that will impact us. We have three ships there, God willing we will send a fourth ship to the eastern Mediterranean as soon as possible. Let them understand that they cannot deal with Turkey with such methods," he said during a visit to North Macedonia.

"The [EU sanctions] decisions will not affect in the slightest our country's determination to continue hydrocarbon activities in the Eastern Mediterranean," the Turkish Foreign Ministry added in a statement.

The EU's failure to mention Turkish Cypriots in its decisions "showed how biased and partisan the EU is on the subject of Cyprus," the ministry also said.

‘Up to €400m at stake’
An EU diplomat told Reuters Ankara could lose some 150 million of 400 million euros the bloc had earmarked for 2020 for everything from political reforms to agriculture projects to help Turkey prepare for eventual EU membership. The EU had been due to give Turkey €4.45bn between 2014 and 2020, but it cut and suspended some funding last year. It has frozen membership talks and negotiations on upgrading its customs union with Turkey, accusing Erdogan of grave violations of human rights.

Nicosia, meanwhile, rejected an offer by breakaway Northern Cyprus controlled by Turkish Cypriots for talks on sharing gas reserves. It described the proposal as a thinly-disguised attempt to divert attention away from the need to resume peace talks for a comprehensive settlement to the island’s division.

"Mr Akinci's proposal seeks to deflect away from the real issue, which is how to solve the Cyprus problem," Cypriot government official Vassilis Palmas said, referring to Turkish Cypriot leader Mustafa Akinci.