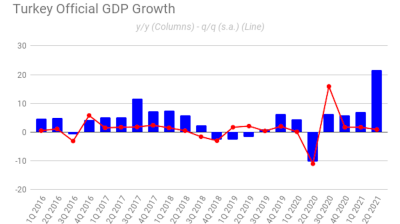 Turkey's gross domestic product expanded by a massive 21.7% y/y in the second quarter, official data from the Turkish Statistical Institute (TUIK) showed on September 1, as the economy rebounded powerfully from the sharp slowdown caused by the onset last year of the COVID-19 crisis.

However, there remains substantial disquiet among academics, observers and the public as to the reliability of TUIK’s statistical reporting in areas including economic output, inflation and unemployment. Added to that, since the end of May, when Turkey’s official 1Q GDP expansion came in at 7% y/y, economists have described the surge as running on feet of clay. The argument is that the growth has been bought at the price of a weaker currency and higher inflation, making Turks a lot poorer in dollar terms. GDP per capita in dollar terms has shrunk by towards 40% since 2013.

The 2Q growth data released by TUIK also showed GDP expanded 0.9% q/q on a seasonally and calendar-adjusted basis. Both the annual and quarterly growth figures were anticipated by the market. Also in the latest release on GDP was an upwardly-revised 2.2% q/q expansion in Q1.

The boom in economic activity is a factor driving Turkey’s double-digit inflation which, in turn, then erodes the value of the growth. On September 3, August's official inflation reading is expected to stay near the 18.95% posted for July, just 5 bp below the policy interest rate of 19%, one of the highest in the world. The government still officially forecasts 5.8% growth this year, but Finance Minister Lutfi Elvan previously predicted it could exceed 8% annually with a strong Q2 performance.

'Flattered by favourable base'

In a note to investors, Jason Tuvey at Capital Economics said that robust growth and high inflation mean the central bank would likely hold off cutting rates until the tail-end of this year. He noted the 21.7% y/y growth recorded for 2Q “was flattered by the favourable base, and around 2.5% above its pre-virus trend”.

Tuvey added: “With the economy already operating above its pre-virus trend, further gains in GDP will prove more difficult. But with the Q2 outturn stronger than we had expected, our forecast for GDP growth of 5.8% this year now looks overly pessimistic. An expansion of closer to 8.0% now seems more realistic.”

The further expansion in Q2 came despite a severe third wave of COVID-19 that forced the government to tighten restrictions and impose a three-week lockdown in May. The economy also endured a sharp tightening of financial conditions following the firing by presidential decree of central bank governor Naci Agbal in late-March.

Tuvey further advised: “Monthly activity figures showed that industry held up well over the course of Q2 but that retail sales slumped in April and May before rebounding strongly in June.

“The breakdown of the GDP figures showed that growth in Q2 was supported by both domestic demand and a boost from net trade. After contracting by 0.7% q/q in Q1, household consumption rose by 1.6% q/q in Q2. Investment spending and government consumption also expanded in Q2, both by 0.7% q/q. Meanwhile, after falling by 2.8% q/q in Q1, exports recouped some of their lost ground and increased by 2.2% q/q. Imports fell for a third consecutive quarter, by 3.3% q/q.”

Turkey's central bank chief since March Sahap Kavcioglu reportedly told investors on September 2 that the policy stance, including the 19% key rate, would secure a fall in inflation which he expected to begin in the fourth quarter. Reuters reported three sources as relaying Kavcioglu’s remarks from a conference call.

Several sources said Kavcioglu did not emphasize hawkish guidance given in past policy statements, namely that the key rate would remain above inflation, but few interpreted it as a dovish signal, the news agency further reported.

Analysts are less confident than the central bank that inflation will cool in coming months. But given pressure for monetary stimulus from President Recep Tayyip Erdogan, analysts nonetheless anticipate that the regulator will begin cutting rates towards year end.

Kavcioglu was also reported by sources as telling local investors that there is no need for credit growth to slow further, after a recent decrease, with the central bank working on further possible measures to address consumer loans.