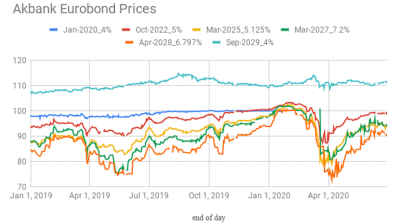 Akbank, one of Turkey’s largest private lenders, has sold $500mn worth of USD-denominated senior unsecured eurobonds abroad. They are due February 2026 at a fixed coupon rate of 6.80%, the lender said on June 30 in a stock exchange filing.

Turkey’s five-year credit default swaps (CDS), treated as a volatile trading instrument by the markets, stood just below 500bp as of July 1.

In December, Akbank, controlled by Turkish conglomerate Sabanci Holding, received approval from the Capital Markets Board (SPK) to sell up to $2bn worth of papers abroad.

In April and May, almost all countries in Eastern Europe sold eurobonds. Those that didn’t are preparing for auctions.

On June 20, Bloomberg quoted unnamed people with knowledge of the matter as saying that Turkey Wealth Fund (TVF) was considering a eurobond issuance later this year of at least $2bn and would soon choose around half-a-dozen banks to help arrange the deal. The wealth fund is rated three levels below junk by Fitch Ratings with a stable outlook. The sources were also reported as saying that TVF was working on getting a grading from a second international rating firm.

The fund’s apparent weighing up of a decision on a eurobond sale is taking place with central banks around the world pursuing stimuli that are spurring a global rally in junk bonds, Bloomberg noted.

In the last auction held by a Turkish issuer prior to Akbank’s latest issuance, the Turkish Treasury in February sold $2bn of 5-year eurobonds with a 4.25% coupon and $2bn of a 10-year paper at 5.45%.

In March, the Treasury tapped €1.26bn from local lenders in EUR-denominated paper with a 0.75% semi-annual coupon.

In what’s left of 2020, the Treasury has Japanese yen (JPY) 60bn of samurai bonds maturing in December.

According to the latest data, Turkey was obliged to refinance a total of $148bn in external debt, excluding obligations to foreign branches and affiliates, in the 12 months ahead as of end-April.

In May and June, there has been an acceleration in Turkish borrowers’ striking loan deals, while Akbank’s eurobond deal may open the way for other issuers, although the cost is high.

Turkish companies have obtained a total of €944mn worth of coronavirus (COVID-19) crisis financing from the European Bank for Reconstruction and Development (EBRD) so far, almost a quarter of the €4bn coronavirus package made available by the development bank.

The World Bank has also been active in providing coronavirus rescue financing to Turkey.