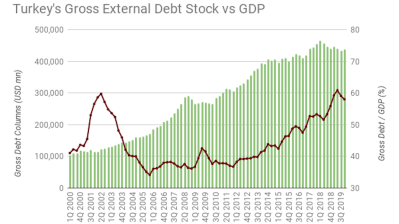 Turkish private lender Akbank, owned by the Sabanci conglomerate, has obtained an $560mn-equivalent and 367-day syndicated loan in two tranches of $246mn and €284mn with all-in costs at Libor+2.25% and Euribor+2.00%, it said on October 8 in a stock market filing.

The renewal rate of the syndicated loan stood at 80% as the lender obtained in March last year a $700mn loan. However, Akbank noted in its filing that the total loan amount may be increased through the “accordion” feature of the facility until the drawdown date of April 9.

The announcement of the Akbank loan came as Jason Tuvey of Capital Economics circulated a note entitled “Turkey: banks more vulnerable than in currency crisis”. “Turkey’s banks muddled through the [Turkish lira] currency crisis two years ago, but they are now in a weaker position to confront the economic and financial market fallout from the coronavirus outbreak,”

Turkish lenders’ syndicated loan renewal costs fell in the spring season of 2019 after booming in the autumn season of 2018 following the country’s currency crisis that peaked in August.

However, the renewal ratios are still low, the costs remain higher than the pre-crisis costs and two-year maturities have disappeared.

Despite concerns over a “coronavirus (COVID-19) sudden stop” in capital flows to emerging markets, Akbank has managed to again set the benchmark for its peers entering the Turkish lenders’ spring syndicated loan refinancing season.

State-owned Ziraat Bank has a $1.4bn and one-year loan obtained in March 2019 from Emirates NBD while Eximbank needs to renew a $100mn loan in April along with Ziraat Katilim ($250mn) and Vakifbank ($1.1bn).

Also on April 2, Yildiz Holding-owned Ulker Biskuvi, a biscuit and confectionery producer that is one of Turkey’s largest food companies, said in a stock exchange filing that it obtained a $455mn syndicated loan with a maturity of three years.

The loan consists of a syndicated facility of $374mn and a parallel loan of €75mn provided by the European Bank For Reconstruction and Development (EBRD), the largest lender among eight international financiers in the transaction, the EBRD said on April 2 in a separate statement. The EBRD has previously provided a total of €100mn to support Ulker’s operations in Turkey and Kazakhstan.

The latest syndication loan is composed of two trenches of $110mn and €244, according to the filing by Ulker.

Ulker will use the loan to refinance a $375mn syndicated loan maturing this month, suggesting a renewal rate of 121%.

Ulker did not provide costs but it said interest payments will be made semi-annually.

The company has also a $450mn syndicated loan maturing in November 2020.

Moody’s Investor Services said on March 31 that risks from the coronavirus crisis went beyond frontier markets to encompass emerging markets such as Turkey and Tunisia that are most reliant on foreign currency debt.

Home of the humbled lira, Turkey’s the biggest cryptocurrency market in the Middle East
Dollarisation in Turkey smashing records
Western capitals wonder what kind of sanctions deal Erdogan may have cooked up with Putin