Turkey's banks are having a rough ride (pictured is a Ziraat Bankası mobile ATM service seen at a festival).
By bne IntellIiNews February 21, 2020

The country has since its 2018 currency crisis faced an insoluble debt overload problem that badly needs addressing. The Banks Association of Turkey confirmed the hiring of the professional services firm to Reuters on February 21. Ernst & Young aims to publish a preliminary report on the viability of an AMC in March or April, two people familiar with the plan were cited as saying separately.

One source was quoted as saying that some in the banking sector are calling the idea a “mega AMC” since it would house non-performing loans (NPLs) from an array of Turkish companies including those in the hard-hit construction and energy sectors.

“Ernst & Young has been picked as an advisor for establishing an AMC, and its structure is still under discussion,” said the other source. Banks want it to focus on loans to small and medium sized companies (SMEs) or corporate loans, the person added.

State and private lenders have been looking at forming an AMC to help clean up $25bn in NPLs weighing on their books. The 2018 crisis cut 30% from the value of the Turkish lira (TRY) versus the dollar. Many companies were left unable to service foreign-currency loans. In all, over 2018 and 2019, the TRY lost 36%. And with markets fearful the Erdogan administration is repeating the mistakes that led to the currency crunch, the currency is under pressure again. 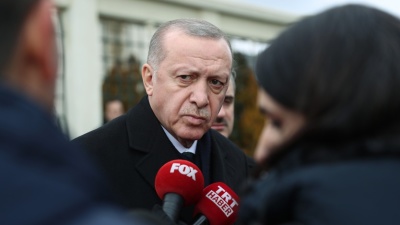 Erdogan speaking to reporters prior to scheduled call with Putin on February 21 (Credit: Turkish Presidency).

By around 19:00 Istanbul time on February 21, the trading day range of the TRY stood between 6.092 and 6.125. The currency market is also trading on news flows pertaining to whether the conflicts in northwest Syria and Libya involving Turkish forces are set to flare up or become resolvable.

The United Nations warned on February 21 that the fighting in northwest Syria—where Russia-backed Syrian government forces are lined up against Turkey-backed rebels—could "end in a bloodbath" and called again for a ceasefire. The UN warned the conflict could cause a catastrophic refugee crisis, with the lives of a great number of children at risk in the wretched conditions they face.

Turkish President Recep Tayyip Erdogan said he would speak by phone with Russia's Vladimir Putin on February 21 at 15:00 GMT and then determine Turkey's stance on the conflict. Speaking to reporters, Erdogan said the French and German leaders had proposed a four-way summit with Russia in Istanbul on March 5, but that Putin had not yet responded. He repeated that Turkey was not withdrawing its forces from Idlib province.

Also on February 21, Khalifa Haftar, Libya’s eastern military commander, said he would be ready for a ceasefire if Turkish and Syrian mercenaries left the country and Ankara stopped supplying weapons to Libya’s internationally recognised government in Tripoli, RIA reported.

“A ceasefire [would be] the result of a number of conditions being fulfilled ...the withdrawal of Syrian and Turkish mercenaries, an end to Turkish arms supplies to Tripoli, and the liquidation of terrorist groups [in Tripoli],” Haftar told the Russian news agency in an interview.