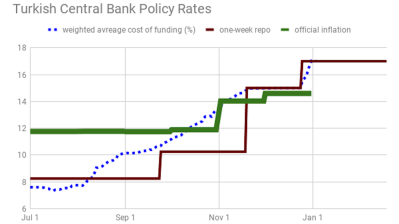 Turkey’s central bank held its benchmark rate, the one-week repo, at 17.00% at its January 21 monetary policy committee (MPC) meeting, shying from the possibility of another hike as anxieties about the country’s faltering economic recovery came to the fore. Capital Economics noted that the regulator’s hawkish tone on inflation supported its view that Turkish rates will remain unchanged throughout the rest of this year.

The move was in line with market expectations. “Today’s outturn follows a cumulative 675bp of hikes to the one-week repo rate at the previous two meetings, which have helped to pull Turkey back from the brink of a balance of payments crisis and restored some of the central bank’s battered credibility,” Jason Tuvey at Capital wrote in a note to investors.

He added: “The further rise in inflation in December is likely to have raised questions in policymakers’ minds about the need for additional tightening. The headline rate increased from 14.0% y/y in November to 14.6% y/y in December. Indeed, the accompanying statement continued to strike a relatively hawkish tone on inflation. It noted that numerous factors—from strong domestic demand to high inflation expectations—continue to affect the pricing behaviour and inflation outlook adversely”.

Some academics believe Turkey’s inflation rate in reality is two to three times what is officially presented, but it appeared, however, that the MPC put concerns over the path of inflation to one side given the signs that Turkey’s economic recovery was looking less than assured at the end of 2020.

Economic activity was constrained as the country’s coronavirus outbreak worsened to the point that it was recognised as the worst in the Middle East in terms of the infection rate (partly because the government started announcing asymptomatic infections whereas before, it disclosed, it had only been including symptomatic cases in the public data) and Turkey entered the new year in a nationwide lockdown.

Meanwhile, as the Erdogan administration in early November publicly stated that it would stand back and take the “bitter pill” as the newly appointed central bank governor Naci Agbal switched from loose policy to tightening, the consequent impact on rates was felt by consumers and business putting a squeeze on growth. “Timely indicators chime with the [MPC] statement’s nod to a ‘slowdown in services and related sectors’ and that ‘credit growth has started to slow’,” said Tuvey.

With the shift back to monetary orthodoxy, the lira has lately rallied to a 15% gain against the dollar from its November low, though recent comments from President Recep Tayyip Erdogan, suggesting interest rates should be lowered, have threatened to undermine the central bank’s policy shift. “But, for now at least, we remain comfortable that orthodoxy will stick. Even though Mr Erdogan railed against high interest rates last week, he did caveat his comments with ‘whether they listen or not’—while it’s not completely clear who he was referring to, it could be a sign that the CBRT [Central Bank of the Republic of Turkey] has acquired a greater degree of autonomy from the presidential palace,” Tuvey observed.

Greater autonomy as things stand, or not, global investors are wary of Erdogan making a sudden monetary intervention as he and his party sink in the polls. “We’ve seen this so many times before. No one believes this is a long-lasting story now. There’s no one left to have any faith that Erdogan has learned. We’re all assuming this goes on for six months and Erdogan goes back to calling for interest rate cuts,” Charles Robertson, chief economist at Renaissance Capital, told the Wall Street Journal on January 7.

Selva Demiralp, a professor of economics at Koc University and director of the Koc University-TUSIAD Economic Research Forum, told Al-Monitor on January 21 that Agbal has helped improve financial stability since his surprise appointment, but he added that Turkey’s economy was not “out of the woods yet” as investors were waiting to see whether tight monetary policies remain in place.

“Our journey toward the 5% inflation target is going to be a long and tiring one,” Demiralp said, noting plenty of work lies ahead for the central bank in reestablishing its credibility and managing expectations. “It is harder to achieve this during the pandemic, but we don’t have much of a choice. Any premature easing would backfire and tighten financial conditions even further,” he said.

Capital concluded that so long as orthodox policymaking remained in place, hopes of an improvement in macroeconomic stability would support a further rally in the lira and it expected the lira to strengthen further to 7.00 against the dollar by end-2021 from around 7.40 now.