There is a subdued outlook for emerging and developing Europe in 2019 largely as a reflection of prospects for Turkey, “where—after a growth surprise in the first quarter from stronger-than expected fiscal support—the contraction in activity associated with needed policy adjustments is projected to resume”, the International Monetary Fund (IMF) said in its latest half-yearly update of its World Economic Outlook (WEO), released on July 23. 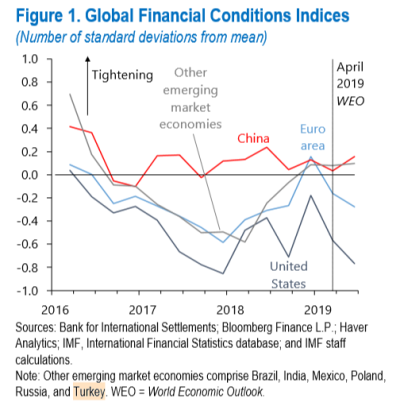 Turkey again got a mention as the update looked at the potential for “abrupt shifts in risk sentiment”, saying: “As discussed earlier, the increase in US-China trade tensions in May caused a rapid deterioration in global risk appetite. While sentiment improved in June, potential triggers for other such risk-off episodes abound, including further increases in trade tensions; protracted fiscal policy uncertainty and worsening debt dynamics in some high-debt countries; an intensification of the stress in large emerging markets currently in the midst of difficult macroeconomic adjustment processes (such as in Argentina and Turkey); or a sharper than-expected slowdown in China, which is dealing with multiple growth pressures from trade tensions and needed domestic regulatory strengthening.

“A risk-off episode, depending on its severity, could expose financial vulnerabilities accumulated during years of low interest rates as highly leveraged borrowers find it difficult to roll over their debt and as capital flows retrench from emerging market and frontier economies.”

Thirteen of 21 economists surveyed by Reuters said they expected that the Turkish central bank would bring in another rate cut at its monetary policy committee (MPC) meeting on January 16. The ... more

Turkish industrial production rose for the second-straight month in October—but the pace of the recorded growth was significantly less than anticipated, weighing on expectations for a fast ... more