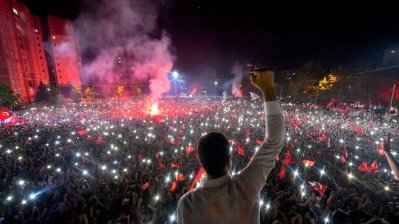 Main Turkish opposition party, the Republican People’s Party (CHP), and its allies now control municipalities that account for roughly 70% of Turkey’s economy, according to Sinan Ulgen of the Carnegie Europe think-tank, as cited by The Economist.

Ulgen made his assessment after the CHP’s Ekrem Imamoglu on June 23 won a landslide in the Istanbul mayoralty revote, defeating AKP candidate and ex-PM Binali Yildirim, and earning himself a reputation as an effective antidote to populist authoritarian politicians.
“They [the CHP and its allies] now have the means to fund their political activities, and to eliminate AK’s network of patronage,” Ulgen was cited as saying.

As the country’s largest city, Istanbul accounts for around one-third of Turkey’s economic output. It is the business and cultural capital of the country, while it is also where Turkish President Recep Tayyip Erdogan rose to prominence in politics after he became mayor of the city in 1994.

To win against the Islamist-rooted AKP in such resounding fashion, Imamoglu forged a coalition that included the secular CHP, Kurdish voters, the breakaway nationalist Iyi (“Good”) party and some Islamists. A good deal of AKP supporters disillusioned with Turkey’s economic turmoil and level of corruption also gave their vote to Imamoglu. There is now speculation as to whether Imamoglu could move on to fighting for the presidency. The next national elections are not scheduled until 2023 but there are grounds for believing snap elections could be called if political events evolve in a certain direction.

There is also speculation that, ecouraged by Imamoglu’s success, some estranged AKP politicians might launch a rival conservative party.

The European Bank for Reconstruction and Development (EBRD) and JPMorgan have launched an advisory support programme in Istanbul that provides access to knowhow to selected women entrepreneurs in ... more