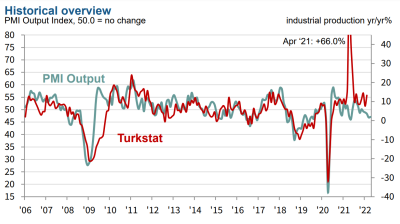 Manufacturing production in Turkey slowed for the fifth month running in April, with the headline purchasing manufacturers’ index (PMI) for the sector registering 49.2 in April, following 49.4 in March, 50.4 in February and 50.5 in January. Any figure below 50.0 denotes a contraction.

Commenting on the Istanbul Chamber of Industry Turkey Manufacturing PMI survey data, Andrew Harker, economics director at S&P Global, said: “The business climate facing manufacturers in Turkije [now the official name of Turkey] was challenging again in April as price pressures remained elevated and supply-chain disruption continued. The war in Ukraine added to these issues and also affected exports which softened for the first time in three months.

“That said, both cost pressures and supplier delays were at the least pronounced since September last year, providing some hope that conditions will become more conducive to growth as this quarter progresses.”

The PMI reading is derived from indicators for new orders, output, employment, suppliers’ delivery times and stocks of purchases.

S&P Global said of the April data: “A lack of demand, price pressures and the war in Ukraine were all reportedly factors leading to a scaling back of output. Fragile demand was highlighted by a further easing of new orders as firms reported difficulties securing new business amid rising prices. New orders moderated for the seventh month in a row, while new export business slowed for the first time since January.

“Cost pressures remained pronounced in April, although the rate of input price inflation eased for the fourth successive month to the softest since last September.”

Exchange rate weakness and the war in Ukraine were the main factors causing higher cost burdens, according to respondents, with oil, natural gas and sea transportation all reportedly up in price.

“In turn, manufacturers raised their output charges markedly again,” S&P Global added: “Suppliers’ delivery times lengthened amid widespread reports of difficulties securing raw materials. Although still sharp, the latest lengthening of lead times was the least pronounced in seven months. Difficulties sourcing materials, rising costs and fragile demand contributed to the scaling back of purchasing activity and inventories of both purchases and finished goods in April.”