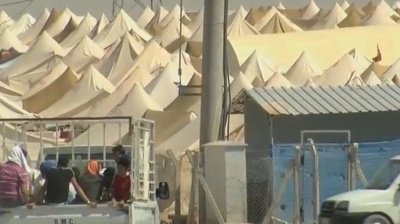 Syrian refugee camps on the Turkish border for displaced people of the Syrian civil war. Turkey is not volunteering to set up similar camps for fleeing Afghans.
By bne IntelIiNews August 30, 2021

Turkey is attempting to do everything it can to prevent Afghans fleeing the Taliban crossing its border via Iran, but its moves are highly unlikely to succeed because the “refugees will always find a way into the country”, according to Fadi Hakura, head of the Turkey Project at foreign affairs think tank Chatham House.

Hakura told the UK’s Channel 4 News on August 30 that “Turkey does not want to let them in. At the moment the Turkish economy is faltering, so any additional refugees [coming] into Turkey will further damage President [Recep Tayyip] Erdogan’s popularity in the country”.

He added: “So Turkey is trying to do everything it can to prevent them coming in, cooperating with Iran, fortifying its border with Iran, but I think this will partially stem the tide but will not fully prevent it.

“I think Turkey is doing its utmost to close the pathways via Iran into Turkey and then further onwards to Europe but I highly doubt it will work because ultimately refugees will always find a way into the country given the worsening situation in Afghanistan.”

The Iran-Turkey border is 534 kilometres (332 miles) in length and Turkey has lately accelerated efforts to complete a modular wall along the entire frontier.

Erdogan, said Hakura, is under intense political pressure, the way he was not “in 2015 when Turkey allowed in over one million Syrian and non-Syrian migrants via Turkey into Europe at a time [when] the [Turkish] economy was still reasonably positive.

“Today,” he added, “unemployment is very high, the economy is faltering, incomes are down, and therefore the environment has completely changed compared to five or six years ago”.

Up to half a million Afghans could flee their homeland by year-end, the UN refugee agency UNHCR said on August 27.

UNHCR appealed to all neighbouring countries to keep their borders open for those seeking safety. However, latest reports from bne IntelliNews’ Eurasia correspondents show little willingness across Central Asia, Iran and Turkey to accept Afghan refugees fleeing their country’s new Taliban regime. An appeal in Mongolia, meanwhile, to welcome some of the refugees, has got nowhere.