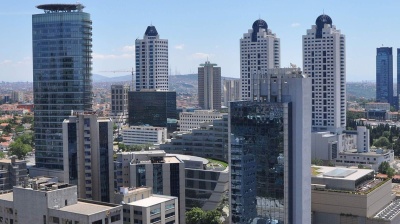 Levent business and financial district in Istanbul.
By Akin Nazli in Belgrade August 20, 2019

The Turkish central bank has simultaneously cut reserve requirements and hiked interest rates it pays on required reserves for lenders that achieve loan growth of between 10-20%, the regulator said on August 19 in a written statement.

Accordingly, for those banks that qualify with loan growth, the required reserve ratio for deposits with up to 3-month and 6-month maturities has been pushed down to 2% from the previous 7% and 4%, respectively.

Government pushes private banks
The central bank’s announcement comes with the government demanding that private banks join state banks in boosting loans with the aim of stimulating economic activity that has collapsed amid the stark economic downturn Turkey has suffered since last year’s lira crisis. However, previous lending cycles have resulted in rising FX demand and growing imports due to low confidence in the government’s economic policy making. Following the central bank announcement, the lira weakened to 5.75 against the USD, a level it had not been seen at since June. The currency was 7% weaker against the dollar compared to where it stood at the end of last year. Dollar-denominated bonds issued by Turkey's government edged lower after the central bank issued its statement.

There is some speculation that the Erdogan administration is not concerned that the measures do not feed into sustainable growth because it is looking for a 12-month economic splash in line with a plan to call early elections.

With the revisions, the central bank is to provide TRY5.4bn and $2.9bn worth of gold and FX liquidity to the market, according to the statement from the authority.

Seen as radical
The central bank’s steps to revive loan growth are radical in the eyes of Seker Invest, as relayed in its August 20 daily bulletin. The equities house noted that the authority said the changes were aimed at supporting financial stability, but in essence the decision aims to encourage banks to grant new loans given that lower required reserve ratios and higher returns go to those lenders that generate higher loan growth.

Banks with loan growth that stays below 10% will be penalised, Istanbul-based Seker Invest observed, adding that the additional lira liquidity that will be provided to the system should also change indirectly through the reserve option mechanism (ROM) channel, which is hard to quantify.

Seker considered the move to be a further step in loosening monetary policy with the aim of reviving domestic demand. It follows the recent 425bp rate cut introduced by the central bank after its governor was fired by presidential decree for not following interest rate policy “instructions” and the decision to hold 1 and 3 month swap auctions in which the central bank provides lira liquidity at lower rates.

William Jackson, chief emerging markets economist at Capital Economics, said the move worried investors because high rates of loan growth during recent Turkish economic recoveries had lead to higher imports and a widening current account deficit. “The move essentially reduces the required reserve ratios for banks with higher loan growth. I think it is worrying, if we consider that what is needed is weak domestic demand and growth lead by exports,” Jackson said in remarks cited by Reuters.