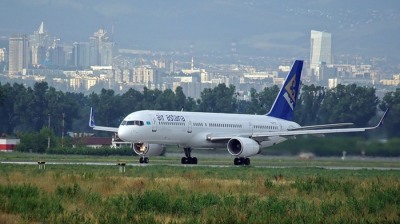 The airport is located around 15km from Kazakh commercial capital Almaty, itself about 430km from the Chinese border.
By Kanat Shaku in Almaty April 30, 2021

Turkey’s TAV Airports and Kazakhstan Infrastructure Fund (KIF) have completed the buyout of Almaty Airport, with TAV taking a stake of 85% and KIF, managed by VPE Capital and backed by Kazyna Capital Management (KCM), receiving the remaining 15%. The capacity of the airport is to be doubled with a $200mn investment.

The deal has been sealed despite the difficulties posed by the coronavirus pandemic. The previously agreed purchase price of $415mn was revised down to $365mn to take account of decreased global passenger volumes. Subject to the recovery of passenger traffic to pre-pandemic levels, the consortium will pay an additional $50mn in coming years.

The project in Kazakhstan's commercial capital has been hailed as one of the largest single foreign direct investments (FDI) in the Central Asian nation outside of the resources sector as it is set to bring in over $600mn in foreign capital while also drawing leading international airport management expertise for a key Kazakh infrastructure asset.

The completion of the buyout was the first step in a $655mn infrastructure project that will feature the construction of a new international terminal, the modernisation of the domestic terminal and the adoption of the International Air Transport Association’s (IATA's) Optimum Level of Service standards across the facility.

Ainur Kuatova, CEO of Kazyna Capital Management, which played a key role in facilitating the deal, said: “Kazyna Capital Management’s mission is to promote sustainable economic development in the Republic of Kazakhstan, and this project does just that – at scale. We’re proud to be part of this milestone project that brings in excess of USD 600M in foreign capital along with leading international expertise into a key infrastructure asset. For every dollar that KCM is investing, foreign partners are investing more than 20 dollars.”

Almaty Airport, the home of Kazakh flag carrier Air Astana, served 6.4mn passengers in 2019, up 13% y/y. The airport was able to deliver a net profit in 2020 despite the pandemic-driven traffic drop to 3.6mn passengers during the year. Local airlines Bek Air, SCAT Airlines and Qazaq Air also use the airport as their base.

Almaty, prior to the pandemic, was a major regional transportation hub for 26 passenger and eight cargo airlines serving multiple destinations. Air Astana provided nearly half of the passenger traffic, whereas Turkish Airlines led in cargo.

Roland Nash, partner at VPE Capital, said: “This project represents one of the largest foreign direct investments into Kazakhstan outside of the natural resources sector. The expansion and renovation of the airport will deliver significant economic and social benefit for the Republic of Kazakhstan, with the new terminal expected to increase total passenger capacity to at least 14 million passengers a year. We are proud of our role as a major driver of this project and as a catalyst for attracting international capital and expertise into an important infrastructure asset in Kazakhstan.”

TAV will put up the investment of $200mn over the next three years to build the new international terminal, which is set to double the airport’s capacity, taking it to over 14mn passengers annually.

The World Bank Group’s International Finance Corporation (IFC) and the European Bank for Reconstruction and Development (EBRD) are financing 50% of the acquisition and 100% of the new terminal investment with a loan. The financing is scheduled to close by the third quarter of 2021.

TAV Airports president & CEO Sani Sener, said: “Almaty is strategically located on ‘the modern Silk Road’, established from China to Europe and Africa through air transport. Kazakhstan is the largest country in the region—both geographically and economically—and Almaty is the largest city in the country producing 20% of Kazakhstan’s GDP. “

“As part of the largest airport management group globally, we’ll be promoting Almaty and Kazakhstan as the business capital of the region, as a country with a rich cultural heritage and diverse tourism opportunities,” Sener added. “Our expertise in route development will help to increase the connectivity of Almaty to the world.”

Kyrgyzstan hits Canadian gold mine operator with $3.1bn fine and unveils law on state takeovers of companies
4 hours ago
ECHR deals big blow to Polish government-dominated top court
15 hours ago
Germany deal to buy Sputnik V dead, but India to receive 360mn doses
15 hours ago
Lukashenko signs decree on the transfer of power in the event of his death
15 hours ago
Amnesty International restores Navalny’s Prisoner of Conscience status
23 hours ago