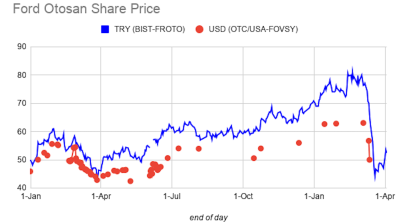 Some March auto sales  growth, at 2% y/y, was seen in Turkey thanks to strong momentum recorded at the beginning of the month before the coronavirus (COVID-19) crisis took a grip on the country’s economy, data from the Automotive Distributers’ Association (ODD) showed on April 2.

“The real-time economic and market disruption from the coronavirus means that much of the data released during the past month offers little insight into current developments in the emerging world,” Capital Economics said on March 27 in a note entitled “First EM GDP contraction in post-war era”.

“Turkey's auto sales showed the first signs of a notable slowdown in March, which we attribute to the effect of the spread of COVID-19,” Vladimir Bespalov of VTB Capital said in a research note.

VTB anticipated that the auto market would take a much more severe hit in the coming months.

“Visibility on the potential effect of COVID-19 on supply and demand remains poor… [while] a potential prolonged decline in the Turkish and European auto markets is the key risk,” Bespalov added.

Both JVs were established amid the economic realignments following the disruption of World War II. They are set to be tested by such a wrenching level of global market turbulence and fallout for the first time.

Tofas has a take-or-pay contract with Fiat while Ford Otosan has a cost-plus-type agreement with Ford, but what condition the various JV partners might find themselves in to push ahead on existing contractual terms remains questionable.

Both ventures have halted production along with non-listed peers.

“Policymakers [in Turkey] have acted swiftly with fiscal stimulus and interest rate cuts, but this won’t prevent output falling sharply in Q2,” Liam Peach of Capital Economics said on April 1 in comments on the March manufacturing purchasing managers’ index (PMI) release for the emerging Europe region, posted in a note with the title “The slump in output has only just begun”.