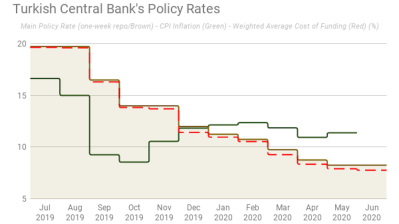 Turkey's official consumer price inflation unexpectedly accelerated in May to 11.39% y/y from April’s five-month low of 10.94% y/y with elevated food and energy prices countering some of the downward impact from weaker demand amid the pandemic, according to data released by the Turkish Statistical Institute (TUIK) on June 3. The gain—which came despite market surveys predicting little change—followed two months of decline. May’s month on month rise was 1.36%. 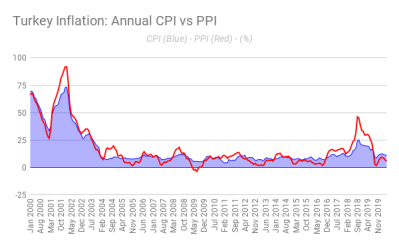 Jason Tuvey at Capital Economics pinned the blame for the upward price pressure on the recent bout of depreciation that took the Turkish lira (TRY) to an all-time low early last month, saying in a note: “The rise in Turkish inflation in May, to 11.4% y/y, suggests that the effects of the sharp fall in the lira in the early part of the month more than offset the impact of weaker domestic demand on price pressures. But with the lira having rallied over the past couple of weeks, this is unlikely to deter the central bank from cutting interest rates a little further at this month’s MPC meeting [on June 25].”

The TUIK inflation release for May showed that energy inflation, a key driver of broader price pressures, rose to 5.2% in May from 3.3% in April. Food costs, which account for slightly more than a fifth of the consumer goods basket, inreased an annual 12.9%, up from 11.3% in April. Annual core inflation, which strips out the effects of volatile items such as food and energy, came in at 10.3% compared to 9.9% in the previous month, implying that some of the underlying cost pressures are increasing.

Noting how the weaker lira and a slight recovery in oil prices pushed up local fuel prices, causing transport inflation to rise from 5.5% y/y in April to 6.7% y/y in May, while the food inflation rate marked a nine-month high, Tuvey added: “All of this more than offset the impact of weaker demand on price pressures. Indeed, inflation in those price categories less susceptible to swings in the lira eased last month. Overall, though, core inflation edged up…”

Tuvey also observed: “At the margin, the rise in inflation in May could make the central bank (CBRT) less inclined to cut interest rates further to support the economy as efforts to contain the coronavirus are scaled back. That said, with the announcement of financial support from Qatar driving a rally in the lira in recent weeks, we think that the CBRT will deliver a 50bp cut in the one-week repo rate, to 7.75%, this month.

“Further ahead, the main risk is that policy is kept too loose for too long. This would ultimately lead to interest rate hikes coming on to the agenda in Turkey much sooner than in other parts of the world.”

Retail prices in Istanbul, Turkey’s largest city and business capital, rose 2.16% on a monthly basis and an annual 11.8% in May.

May production revived after being dragged down by shutdowns at the Czech Republic's main car factories in April, but the overall increase was softer than expected.

This is the first time since June 2004 that foreigners’ share in the stock exchange has dropped below the 50% mark.

Russia’s Watcom Shopping Index has recovered three quarters of the ground lost during the coronacrisis, according to the latest data for week 26 of this year, after restrictions in Russia were eased in June.

Czech industrial production down by 25% y/y in May, up 13.8% m/m
21 hours ago
Foreigners’ share at Borsa Istanbul falls below 50%
1 day ago
Albania’s annual CPI inflation slows to 1.8% in June
1 day ago
COVID-19 lockdown sends Hungary's industrial output back to 2013 levels
1 day ago
Russia’s Watcom Shopping Index regains three quarters of ground lost to coronacrisis
2 days ago