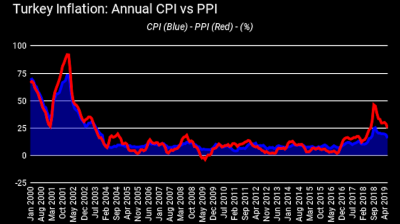 Turkey’s Ministry of Treasury and Finance has sold $2.25bn worth of US dollar-denominated eurobonds due 2024 at a coupon rate of 6.35% and a yield to investor of 6.45%, the ministry said on July 3.

The total amount of the US dollar bond issuance was converted into an equivalent euro liability. As a result of this swap transaction, the euro denominated coupon rate was realised as 3.803%.

The spread over the US Treasury papers rose to 470bp from the 454bp seen in the previous eurobonds sale held in March (see tables below).

The new issue premium was slim and the deal was timed to take advantage of a tremendous rally in Turkish asset prices coupled with falling global yields that tightened the yield curve in Turkish eurobonds, but not all investors are convinced, Global Capital reported on July 3 in a story entitled “Turkey snags $2.25bn thanks to rallying market”.

With this transaction, the amount of funds that has been raised from the international capital markets by the Turkish Treasury in 2019 has reached a total of approximately $8.7bn.

Turkey’s overall foreign currency debt sales, including sukuks sold to local and foreign investors, gold-backed securities issued in the domestic market and private placements to shore up state banks, jumped to a record high of about $20bn so far this year compared to the below $10bn figures seen in 2017 and 2018, Bloomberg reported.

The eurobond sale that followed a tiny $150mn issuance by state-run Vakifbank suggested that the Erdogan administration has managed to revive its foreign financing channels it had temporarily halted with a series of consecutive scandals starting from the shutdown of the lira swap market in London prior to the March 31 local polls thanks to latest easing waves from the leading central banks in the world.

“Liquidity is in the driving seat, and the expectation of more accommodative monetary policy in Europe is driving demand for paper that offers an alternative to low-yield government bonds in Europe,” Marcelo Assalin of NN Investment Partners told Reuters.

It has been a sensational couple of weeks in emerging markets, with money flooding in and asset prices climbing ever higher, but the influx of new money is driving down yields further than some investors feel is justified, Global Capital reported in a separate story entitled “EM investors fear bond ‘euphoria’ driven by ‘wrong reasons’”.

“The backdrop is really remarkable just now… Things are rallying, cash is coming in but we’re struggling to find new and exciting names where we can deploy cash. Most of this week’s deals ended up tightening beyond where we were comfortable,” one unnamed emerging markets portfolio manager told the publication.

“The sharp decline in Turkish inflation in June, to 15.7% y/y, increases the chances that the central bank will embark on an easing cycle [with a 100bp reduction in the benchmark one-week repo rate to 23.00%], at its policy meeting [to be held on July 25]. But all hinges on what happens to the lira and renewed talk of US sanctions could quickly scupper talk of rate cuts,” Jason Tuvey of Capital Economics said in a research note entitled “Plunge in inflation brings rate cuts onto agenda, but all hinges on lira”.

Turkey’s real rates stands as the highest in the world, according to Bloomberg.

“The currency has rallied in the past few days after President Erdogan said that he had received reassurances from President Trump that no sanctions will be imposed in relation to Turkey’s purchase of Russian defence equipment. But there are mixed messages coming out of the US and the saga is not over. If the threat of sanctions escalates and the lira comes under pressure again in the coming weeks, the central bank will probably be forced to hold fire,” Tuvey added.

The Trump administration still plans to impose sanctions on Turkey and remove it from a critical fighter jet program if the NATO ally acquires Russian S-400 air defences, the US officials told Reuters on July 3.

“Trump may try and get a waiver… This may only buy 180 more days to reach a deal on Patriot, while S-400 is deployed, and Turkey is removed from the F-35 consortium… The end result is, in a best case scenario for Turkey, a tenuous waiver from sanctions, an angry Congress, and a future without an aircraft Ankara has paid well over a billion dollars to procure,” Aaron Stein of FPRI also told Reuters.

“If Turkey operates the S-400 and the F-35, it would place the lives of all future American and allied F-35 pilots at risk… President Trump ought to side with the men and women who fly these planes, not a Turkish autocrat desperate to maintain his grip on power,” Eliot Engel, chairman of the House Foreign Affairs Committee, said on July 1 in a written statement.

The case of Turkey validates the importance of the preserving the autonomy of the central bank and central banks need to “persevere” in following their goals and not to be swayed by short-term political goals of decision-makers in government, BIS (the Bank for International Settlements) General Manager Agustin Carstens told Bloomberg on June 30.

Amid perfect chaos on all fronts in policymaking, Turkish markets are keeping to ride a roller-coaster based on ups and downs in portfolio inflows and outflows that cyclically follow each other, as Bloomberg reported on July 3 Borsa Istanbul was near its second bull market this year, just a few weeks after media reports suggested that Borsa Istanbul had entered into the bear market.

Thirteen of 21 economists surveyed by Reuters said they expected that the Turkish central bank would bring in another rate cut at its monetary policy committee (MPC) meeting on January 16. The ... more

Turkish industrial production rose for the second-straight month in October—but the pace of the recorded growth was significantly less than anticipated, weighing on expectations for a fast ... more