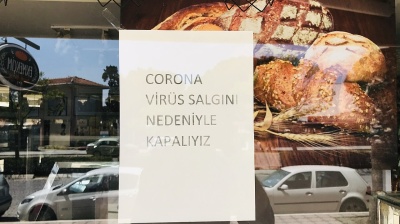 A bakery shop closed due to the coronavirus outbreak in Bergama, Izmir, Turkey.
By bne IntelIiNews August 4, 2020

The Ankara Chamber of Doctors said on August 4 that almost 1,000 people are contracting the coronavirus (COVID-19) every day in the Turkish capital—if correct, the claim exposes Turkey’s official virus figures as severely inaccurate. The government-approved data state that the daily nationwide tally of new cases is running at around that level.

“The number of new cases has gone up significantly over the past week,” Bloomberg quoted Ali Karakoc, general secretary of the Ankara Chamber of Doctors, as saying. The chamber of doctors is Turkey’s second largest with 13,000 members. Official data “fail to reflect the true state of play in the country,” added Karakoc.

If severe doubt spreads about Turkey’s recovery from its coronavirus outbreak, it would be another huge blow to the country’s tourism industry. It suffered abysmal revenues in June and July and has been hoping for a good August as countries lift travel warnings on journeying to Turkish resorts.

The Ministry of Health has not offered comment on the discrepancy and accusations of misreporting.

The intervention caps days of criticism from opposition politicians and some doctors. They insist the daily case count provided by Health Minister Fahrettin Koca portrays a far rosier picture than the reality.

The warning from the Ankara Chamber of Doctors follows an August 2 BBC report based on leaked official documents that appear to show Iran’s official death toll from its coronavirus outbreak has been under-reported by about two-thirds.

Koca has been warning of a potential spike in new cases due to poor social distancing. That has especially been the case in coastal towns where millions of Turks flocked after the government declared victory against the virus in June, easing restrictions on domestic tourism and many other economic sectors to rescue a floundering economy.

Since then, the official daily count of new infections has remained stable at towards 1,000. However, Bloomberg noted, authorities stopped providing a detailed breakdown of patients in intensive care units or on ventilators and hospitals have been fast running out of beds, with new patients being asked to quarantine and take medication at home.

Even former leader of the Soviet Union Mikhail Gorbachev has thrown his support behind the Belarusian population protesting against self-appointed President Alexander Lukashenko.

Tanker tracking companies, meanwhile, see September surge in Iranian crude shipments with one describing “levels we haven’t seen in a year and a half”.

“Putin’s chef” follows through on threat to bankrupt Navalny, bailiffs seize his apartment

Russian bailiffs have seized the Moscow apartment of Alexei Navalny as the close personal ally of Russian President Vladimir Putin, Yevgeny Prigozhin, follows through on threats to ruin the opposition activist.

Romania at high risk of downgrade to junk

Fitch and Moody’s scheduled reviews of Romania’s creditworthiness this autumn, shortly after MPs backed 40% pension hike that could push budget deficit up to 11% of GDP.

TURKEY INSIGHT: Follow the (hot) money
1 day ago
Lukashenko isolated himself from the rest of the world with a secret inauguration
1 day ago
Iran’s oil minister openly admits forging export documents to dodge US sanctions
1 day ago
“Putin’s chef” follows through on threat to bankrupt Navalny, bailiffs seize his apartment
1 day ago
Romania at high risk of downgrade to junk
1 day ago