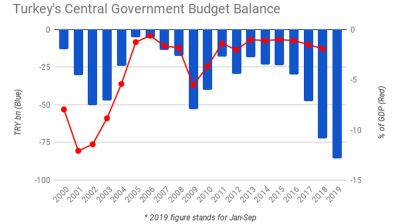 Turkish central bank officials have discussed making an accounting change to book the national lender’s unrealised gains and losses in its so-called revaluation account, accrued due to changes in the market value of its foreign-currency and gold holdings, an unnamed person familiar with the matter told Bloomberg on October 22.

The move, if realised, would pave the way for the central bank to record higher profits and subsequently transfer higher dividends to the Treasury.

It is unclear how advanced the discussions are or whether they would result in a policy change, according to the news agency.

The central bank had Turkish lira (TRY) 61bn ($11bn) in its revaluation account as of October 21.

Even TRY80bn of transfers from the central bank to the Treasury so far this year has not stopped the widening of the government budget deficit. The Treasury’s policy of focusing on short-term borrowing since last year with the aim of avoiding the payment of high interest rates in the long run caused an accumulation of debt redemptions in 2020.

The Treasury is scheduled to redeem TRY75bn worth of lira debt in the first quarter of 2020, the highest figure seen since 2005, the year when the current data set was initiated.

The budget deficit grew by 51% y/y to TRY86bn in January-September.

Meanwhile, the government is working on a draft tax bill to increase income tax on high income levels and to reduce corporate tax levied on non-financials. A luxury real estate tax will also be introduced while vehicle and transportation expenses will be capped in terms of tax reductions.

The government is also planning to introduce a 7.5% tax on US technology companies including Google, Facebook and Amazon.

Romania's biggest airline by the number of passengers transported has initiated a preventive agreement as it aims to avoid insolvency by restructuring its overdue debt worth over €100mn.

Foreign ministry reveals cost of bringing medical equipment to Hungary— but won't comment on why the government picked Budapest-based no-frills airline for the flights rather than specialised cargo carriers.

Incumbent President Andrzej Duda andmayor of Warsaw Rafal Trzaskowski are consistently neck-and-neck in the polls six days ahead of the second round of Poland's presidential election.

Romania’s Blue Air goes from flying high to seeking debt restructuring
7 hours ago
HDZ’s Andrej Plenkovic ready to form new government in Croatia
15 hours ago
Czech mining group OKD to shut down its mines for six weeks
17 hours ago
Hungarian government paid Wizz Air €14mn to fly in PPE from China
1 day ago
Week before crucial vote, no way of telling who will be Poland’s next president
1 day ago