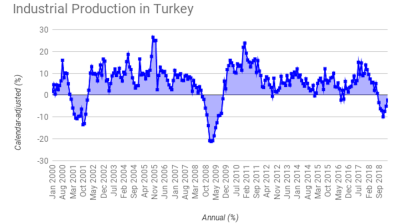 The drop of 2.2% y/y in the month was the lowest of the declines registered across the seven-month-long uninterrupted period of contraction. However, it should be noted that the latest Purchasing Managers’ Index (PMI) manufacturing release for Turkey observed the temporary support laid on by the state as a pre-election stimulus prior to the end-of-March local elections.

The headline PMI for Turkish manufacturing declined to 46.8 in April from 47.2 in March, signalling a further moderation in business conditions in the sector, IHS Markit said on May 2.

Official sign of stimulus
On the other hand, Turkey’s Finance Minister Berat Albayrak lately announced that three public lenders are to launch a fresh loan package in May-June to support manufacturing, an official sign of a fresh pre-election stimulus period to be set in place during the build-up to the controversial Istanbul revote scheduled for June 23, which Albayrak’s father-in-law, President Recep Tayyip Erdogan, is counting on winning to reassert his claim to have the Turkish people behind him.

Prior to the industrial data release, a Reuters poll predicted a 4.25% y/y fall in the calendar-adjusted industrial output index for March.

The seasonally and calendar-adjusted index was in positive territory for the third consecutive month. It was up 2.1% m/m in March.

GDP data due end of month
The Turkish economy contracted 3% y/y in the last quarter of 2018 and economic activity has remained slow since then. The TUIK will release GDP data for Q1 on May 31.

Industrial production contracted by 7.7% y/y on average in Q4 last year while a 4.9% y/y decline in industrial output was posted in the first quarter of 2019.

The central bank's policy rate has stood at 24% since September. Officially, annual CPI inflation hovers around 20% while PPI inflation remains above 30%.

“The much better-than-expected 2.1% rise in Turkish industrial production in March adds to signs that the economy grew in Q1, by around 0.5-0.8% q/q. But the recent tightening of financial conditions means that the economy could contract again in Q2, supporting our view that the recovery will be slow and bumpy,” Jason Tuvey of Capital Economics said in a research note.

“To a large extent, the economy was probably helped by stimulus measures pushed through ahead of local elections at the end of March. Further stimulus may be implemented ahead of next month’s re-run of the Istanbul mayoral election. For what it’s worth, the manufacturing PMI points to a further improvement in industrial activity in the coming months. However, the impact of this is likely to be blunted by the fallout from the recent sell-off in Turkish financial markets. Financial conditions have tightened and point to the economy contracting in Q2 at a similar pace to Q4 2018,” Tuvey added.

Capital Economics remains comfortable with its below-consensus forecast for GDP to decline by 1.8% this year.

Despite a limited recovery in quarter-on-quarter terms, Capital assessed that Turkey’s GDP contracted by 3.3% y/y in Q1, Liam Peach of the economic research company said on May 10 in a research note.

Track record
“The government has a track record of keeping fiscal policy loose ahead of elections. Stimulus put in place after the global financial crisis wasn’t fully withdrawn even after the economy recovered as the government kept one eye on the 2011 general election. And ahead of the constitutional referendum in 2017, the budget deficit deteriorated by around 1% of GDP,” Tuvey said on May 7 in a research note entitled “Turkey: Istanbul election re-run poses stimulus risks”.

Admittedly, the headline budget figures suggest that stimulus the implemented ahead of March’s local elections was limited. But these data paint a flattering picture. Indeed, there has been a growing divergence between the figures produced by the Treasury and those based on IMF definitions. This arises from the fact that the Treasury records certain items (such as privatisation proceeds and central bank profits) as revenues, whereas the IMF recommends that they be logged as budget financing. The recent divergence can be pinned on the central bank’s decision in January to transfer profits to the government three months ahead of schedule. In the Treasury’s presentation of figures, these “revenues” helped to “offset a rise in government spending”, Tuvey added.

However, on the IMF’s definition–which Capital thinks provides a better reflection of the underlying fiscal stance–the primary budget deficit widened by 1.3% of GDP between the end of 2018 and March of this year.

“There is, of course, a case for fiscal stimulus at present given the severity of Turkey’s recession–GDP contracted by 4% in the second half of 2018. And the deterioration in the budget position seen in recent years is unlikely to cause major alarm over the government’s debt position. Even so, a further loosening of fiscal policy ahead of the Istanbul mayoral election would raise further questions over the government’s policymaking credibility. And if stimulus isn’t withdrawn, this could lead to a renewed build-up of the economic vulnerabilities–including a deterioration in the current account position–that were at the heart of last year’s currency crisis,” Tuvey concluded.

S-400 and Kurd manoeuvring
Meanwhile, “unnamed” Turkish officials are giving growing indications that there will be a delay in the delivery of Russia’s S-400 advanced missile defence system, currently scheduled for July to the dismay of the US and Nato.

In exchange for such a delay, the Erdogan government, it is speculated, could continue turning a blind eye to the incremental advances in Idlib, Syria, being made by the forces of Damascus and Russia. Turkey has observation points located in the area, set between former Al-Qaeda militant groups.

Talks on a Turko-US deal on the Syrian Kurds have also moved past the level of being merely rumours. The Kurdish YPG side has confirmed that Donald Trump’s Syria envoy James Jeffrey is acting as an intermediator.

However, Kurdistan Workers’ Party (PKK) attacks on Turkish military forces inside Turkey and hunger strike campaigns being pursued by Kurds in Turkish prisons continue. That’s the case despite a recent permitted visit of lawyers to the jailed PKK leader Abdullah Ocalan.

Erdogan’s nationalist ‘spare tyre’, MHP leader Devlet Bahceli, told reporters in a closed meeting that he was comfortable with the lawyer visits to Ocalan a few hours before accusing the opposition of forming a coalition with the PKK and FETO, the purported shadowy organisation Ankara accuses of orchestrating the failed 2016 coup, in front of the cameras.

Turkey’s main pro-Kurdish political party HDP initially dismissed any possibility of supporting Erdogan’s candidate in the Istanbul revote. However, an HDP spokesman has lately said that the party board was discussing whether support will once again be steered towards the opposition candidate Ekrem Imamoglu, who won the initial Istanbul elections before it was cancelled after AKP claims of irregularities.

It seems that the Kurds will at least demand recognition for support provided to Imamoglu, without having to hear heavy insults and hate speeches from the nationalist wing of the main opposition party CHP and its nationalist coalition partner Iyi Party (Good Party).

Baseball bat attack on journalist
Conditions of ‘controlled chaos’ continue to be in evidence in the country with a weekend attack by a group of people wielding baseball bats on a dissident journalist who opposed Erdogan on a TV talk show.

There are also anxieties that terrorist attacks, which would be exploited by nationalist voices, might occur in the run-up to the Istanbul revote, the outcome of which will be seen by some observers as litmus test of whether Turkey is now plainly under the sway of a dictatorship.

Complaints about rotten onions imported from Egypt, under the sway of Erdogan’s arch-enemy Sisi, are heard only with difficulty under the rumble of the campaigns gathering steam ahead of the rerun, now around six weeks away.

Turkey ‘treads carefully’ as benchmark rate is cut by 50bp