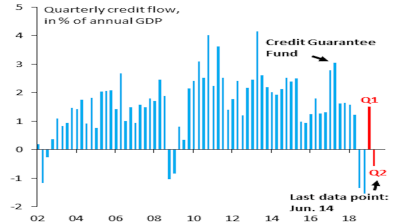 This chart from @RobinBrooksIIF shows the Turkish banking industry's quarterly credit flow as a percentage of GDP, which has a direct impact on the country's growth performance.
By Akin Nazli in Belgrade June 27, 2019

The sale indicated a recovery rate of 2.8%, significantly lower than the 7.6% observed in May when Yapi Kredi previously made an NPL portfolio sale, according to Seker Invest’s calculations.

TRY917mn accounted for 9.7% of the lender’s total NPL book as of Q1, and the sale should reduce the lender’s NPL ratio by 37bps, Seker also said on June 27 in its daily bulletin.

Also on June 26, mid-cap lender Sekerbank said in a bourse filing that it sold an NPL portfolio worth TRY203mn. It did not provide any further details on the sale.

The Turkish banking industry’s NPL ratio stood at 4.05% as of end-April, meaning Turkish lenders recorded TRY109bn of their total TRY2.56tn loan book as NPLs, according to latest data from banking watchdog BDDK.

But Finance Minister Berat Albayrak said back in April during one of his regular economic package announcements that loan portfolios under close monitoring stood at TRY276bn, or 11% of total loans, as of March.

Albayrak also stated that TRY107bn of TRY276bn had already been restructured.

A rough calculation based on data provided by Albayrak shows that Turkish lenders’ problem loans amount to more than 15% of their loan book.

Difficulties amid slower growth
However, Turkey is not alone in the emerging markets universe dealing with rising NPLs. Emerging economies enjoyed high loan growth rates during the monetary easing period that followed the 2008 financial crisis, but they are facing difficulties now that global economic growth is slowing.

Markets are currently running with hopes that a fresh easing cycle will be delivered by leading central banks, including the US Federal Reserve (FED), the European Central Bank (ECB) and the Bank of Japan (BoJ).

However, analysts warn that capital inflows into emerging markets may not amount to a pouring in of money across the spectrum without any risk analysis, as essentially occurred during the post-2008 period. Investors may instead construct a selective stance to pick those emerging economies with comparatively better fundamentals.

Emerging equities markets have soared this year with investor sentiment towards them rebounding, but for some the enthusiasm is tempered by worries about surging bad loans at many banks, Reuters reported in March in an op-ed entitled “Bad loan build-up clouds emerging share market picture”.

“The fact we have higher interest rates and a weaker currency [in Turkey] means there’s a rising probability of corporate defaults and non-performing loans… What that means is they avoid a short-term potential crisis by enabling banks to avoid recognizing the problem, but at the cost of slower long-term credit growth,” Jon Harrison of TS Lombard told the news service.

Weak credit growth ‘likely to hold back recovery’
“Turkey’s banks came through last year’s currency crisis without suffering the severe problems that many had feared. But credit growth will probably stay weak, holding back the economic recovery. Moreover, banks’ reduced level of liquid FX assets, growing deposit dollarisation and increased state intervention in lending decisions means that the next time Turkey faces a crisis, banks are likely to fare a lot worse,” Jason Tuvey of Capital Economics said on June 13 in a research note entitled “Turkey’s banks: why the next crisis will be worse”.

However, Tuvey also contended that Turkish lenders are well positioned to deal with rising NPLs, with the real threats being the dollarisation of deposits and the growing politicisation of bank lending.

“Of course, some banks are better placed than others to cope with a further rise in bad loans. And there are concerns about so-called ‘evergreening’, whereby banks simply agree to roll over loans usually at lower interest rates in order to avoid recording them as bad loans. This weighs on banks’ income, and thus profits,” Tuvey added.

“Turkey saw a big credit expansion in Q1 ahead of the municipal elections, to the tune of 1.5% of GDP. A big surprise to me—a positive one—has been that there was no similar credit push ahead of the June 23 election. That's a structural positive for the Lira and the BoP,” Robin Brooks of the Institute of International Finance (IIF) said on June 24 in a tweet.

Meanwhile, Fitch Ratings has been keeping to a more positive tone on Turkey and Turkish lenders in contrast to the recent surprise downgrades introduced by Moody’s Investors Service.

“The sector's loss absorption buffers remained good owing to solid, but declining pre-impairment operating profitability. Capital erosion from currency depreciation and fairly rapid lending growth at state banks have led to a strengthening of capital buffers via EUR3.7 billion of additional Tier 1 (AT1) bonds in 2Q19. However, refinancing risks remain high given the weaker operating environment, recent market volatility and geopolitical risk. Available FC liquidity at Turkish banks is expected to help in coping with a short-lived market closure, provided that FC deposits are stable,” Fitch said on June 26 in its Turkish Banks Datawatch 1Q19 report as quoted by Seker.

No cause to party in Turkey with Q1 growth of 4.5% y/y overshadowed by “ominous” outlook for Q2

The coronavirus pandemic drove down the local banks' profits as several lenders set aside provisions to mitigate the higher risks generated by the COVID-19 crisis.

Serbia posts strong GDP growth of 5% in 1Q20 despite coronavirus

Although Serbia posted strong GDP growth in the first quarter of 2020, it is expected to fall into recession this year due to the coronavirus pandemic.