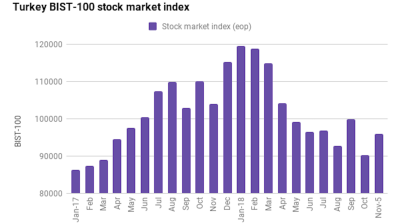 Turkish markets rallied on November 5 after US Secretary of State Mike Pompeo confirmed that Turkey—along with China, India, South Korea, Japan, Italy, Greece and Taiwan—had been granted a 180-day waiver allowing for the importing of crude oil from Iran without fear of Washington’s reinstated sanctions against doing business with the Islamic Republic.

“Turkish markets on fire at the moment: Lira sub-5.36 (stronger by 10 cents), Turkish government bonds rallying 160bps today! I think the inflation data is being seen as a turning point—plus expectations of more good news in terms of the US-Turkish relationship,” Timothy Ash of Bluebay Asset Management said in an emailed comment.

Shares in state-owned Halkbank were also up, climbing 5.16% d/d to TRY7.33 after Turkish President Recep Tayyip Erdogan said on November 3 that US President Donald Trump had promised to give instructions to top officials in regard to the lender, which potentially faces US fines in relation to a senior employee convicted for breaching US sanctions against Iran.

Halkbank’s 2020 and 2021 USD bonds both added 2.7 cents to trade at their highest level since at least June, according to Reuters.

American-Turkish relations improved in October after US pastor Andrew Brunson, who faced terrorism and espionage charges that the White House said were contrived, was released and allowed to fly home to the US.

Thirsty lira bulls are riding on strong assumptions made about what a full normalisation of relations with the US might deliver—but they are perhaps not taking full congnizance of Turkey’s unresolved macroeconomic crisis as well as the mine fields in Turkey-US relations over the Syrian Kurds, Venezuelan gold, ExxonMobil’s drilling activities near Cyprus and Turkey’s plan to acquire the S-400 advance missile defence system from Russia.