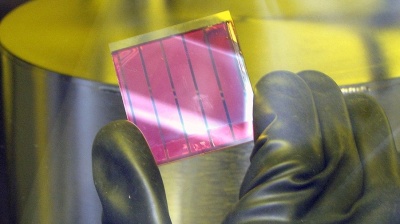 The aim is to attach solar cells to fabric that after use can be dissolved harmlessly into the environment. / Solarmer, wiki, public domain.
By bne IntelIiNews May 10, 2022

Imagine never needing to bother yourself with connecting your mobile phone to a charger thanks to wearable organic solar cells embroidered on clothes fabric. Such a breakthrough could one day become a commonplace technology thanks to the efforts of scientists at the arts and sciences faculty of Turkey’s Yildiz Technical University (YTU).

Faculty member and professor Serap Gunes and her team are working on processing solar cells into disposable bioplastics. So far they have successfully turned on light emitting diode (LED) laboratory lamps and charged a battery with power flows from such cells, according to a May 8 report from Turkey’s state-run Anadolu Agency news agency.

Gunes recently picked up the Academy 2022 prize of Turkey's Energizing Women awards organised by the energy and natural resources ministry thanks to the solar energy project she is developing with seven colleagues at the YTU Organic Electronics Laboratory.

Gunes told the news agency that the team set out to explore the wearable technology after reflecting on whether a small solar panel weaved onto a shirt could produce energy while a person went about daily routines.

"The problem with wearable technologies is that the thin films you prepare spread over the entire surface of the fabric, you cannot spread them in a controlled manner. We thought that as a Velcro fabric, we should stick it, take it off, and not have any problems with washing," she was quoted as saying.

"This work has evolved in other directions, such as: Let's wear it like a raincoat or carry it on us like an umbrella. It attracted a lot of attention, we are currently continuing in this direction," she added.

The bioplastic materials used in the wearable technology dissolve in water and are immediately soluble in nature, according to Gunes.

"You have produced your electricity, your work is done, wash it away, mix it with nature. It's like a disposable solar cell. We are heading toward this point right now,” Gunes was also reported as saying.

UK-based Paysend says it wants to help put Belgrade on the map as the next fintech capital of Europe.

Dronamics to scale up its operations and run its first commercial flights out of Malta and Italy later this year.

Ukraine's IT hub is thriving in Transcarpathia

Transcarpathia has become Ukraine’s new IT hub as a cluster of 11 companies has officially begun working in the south-western region, Ukraine Business News reported on May 24.

Ride-hailing app Snapp! said to be near to claiming $1bn valuation.

A media storm erupted in Albania when videos on Tik Tok showed Enkelejda Kapedani posing in designer clothes in her office and driving a BMW.