Turkmenistan: The loneliness of the long-distance cyclist 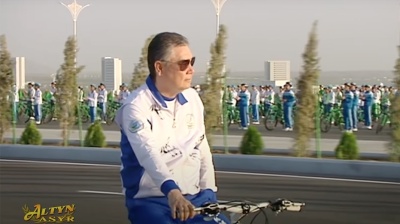 State television showed the president riding, often completely alone, on deserted roads lined by hundreds of members of the public made to applaud and perform song-and-dance routines.
By Akhal-Teke: Eurasianet June 10, 2021

In the crude art of Kremlinology as applied to modern Turkmenistan, horses offer a promising avenue of exploration.

President Gurbanguly Berdimuhamedov is endlessly fond of the native Akhal-Teke breed and rides them frequently – in part to demonstrate his horsemanship skills and, accordingly, his symbolic fitness to lead the country.

It cannot be without significance, therefore, that he is by degrees relinquishing the role of first rider to his son, Serdar. In mid-April, Serdar took over leadership of the Ashgabat-based International Association of Akhal-Teke Horse Breeding from his father. Berdimuhamedov had headed the organisation since its creation in 2010. 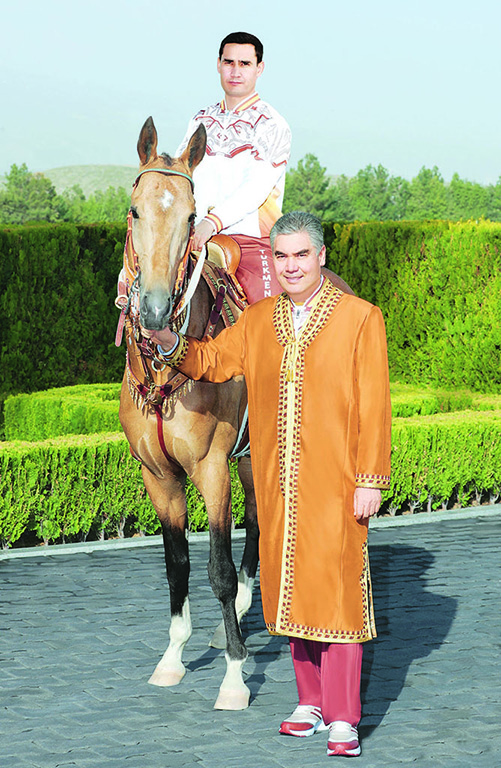 In the latest episode of equine-constitutional theatrics on June 6, father and son together visited the Akhal-Teke equestrian complex, “to meet with [the president’s] favourite horses,” as the state news agency phrased it. Once there, Serdar presented his father with the gift of a horse, Khankerven. Berdimuhamedov flipped the gift around, however, by giving it back to his son.

The pictures of Serdar in the saddle but with Berdimuhamedov holding the reins is almost painfully on the nose. The smart money has to be on a Kazakhstan-type scenario, whereby the president at some point recedes into the background but continues to run the show from behind the scenes.

It is not difficult to see why this kind of transition would be needed. Serdar does not cut an impressive figure.

He is reportedly ill-tempered and a nasty boss. In 2019, when he was in charge of the Ahal province, Vienna-based website Chronicles of Turkmenistan noted that he ran affairs very like much the despot-in-waiting. “His favourite expression when talking to subordinates was: ‘I will wring your neck,’” one source told the website.

And he is not especially well-endowed with charm. This week, Serdar embarked on yet another trip to Russia. He had been there twice already on official business in April.

The event on this occasion was the St Petersburg International Economic Forum, where he robotically read out a vapid speech on urban development in Turkmenistan. Four minutes into his speech, the moderator even cut Serdar off, warning him to wrap up.

To stretch the horse metaphor to perhaps beyond breaking point, the television images from the equestrian complex were telling. On a ride after the gifting theatre, the father looked confident and took his horse through the paces with consummate ease. Serdar appeared awkward and uncomfortable.

When and if Berdimuhamedov does retire, he will be able to do so in comfort and luxury. As Chronicles has reported, the president has come into possession of a brand new, personalised Boeing costing north of $90mn. The aircraft is replete with the usual    detailing expected of potentates: white leather furnishing aplenty, golden-plated bathroom fittings, expensive carpets and so on. While it is on the one hand entirely fitting for a president to have a personal plane, Chronicles wonders why the leader of a country enduring routine food shortages needs three of them.

The economic front brings mixed news after all.

It is encouraging that Turkmenistan has found an eager new buyer for its excess electricity in Iran, for example. Tehran-based media reported that Iran’s state power company has agreed to purchase 140 megawatts of electricity from Turkmenistan (no price tag has been reported). The cause for the surge in demand is intriguing. Iranian energy officials have said that supply is being tested by the activities of unlicensed cryptocurrency miners.

Russian hydrocarbons giant Lukoil has come forward to offer its services as operator of the Dostluk oil and gas field in the Caspian Sea, TASS news agency reported on June 3. A production-sharing agreement is apparently already being put together. This is an intriguing development because when news first emerged that the field was to be jointly developed by Turkmenistan and Azerbaijan – neighbours who have not always enjoyed the friendliest of ties – it generated optimism that the project could lay the groundwork for eventual construction of the elusive Trans-Caspian Pipeline, or TCP.

The point of that pipeline would implicitly be to offer European gas customers fresh alternative options to Russian supplies. While Lukoil is not a state company, it operates, like any major enterprise in Russia, at the pleasure of the government. Its involvement in Dostluk, which is said to hold anywhere between 65 and 130 million tons of oil, does not necessarily spell trouble for TCP, but it does complicate the picture.

There is grumbling at another slow-developing piece of regional energy transportation infrastructure. Pakistan is now intimating that it is unwilling to agree on a pricing mechanism for the gas it receives through the Turkmenistan-Afghanistan-Pakistan-India (TAPI) pipeline until the project is complete. And The News, an English-language Pakistani newspaper, cited Tabish Gauhar, a special advisor to the prime minister, as saying that Islamabad would not commit to paying for gas until it had crossed safely through Afghanistan.

“In case of a halt of gas supply to Pakistan in the wake of any subversive activity in Afghanistan, Pakistan will never take the risk at any cost,” Gauhar is quoted as having said.

Turkmenistan has been dealt a bit of a blow in another area too. Kazakhstan announced on June 7 that it has slapped a temporary ban on the import of tomatoes and bell peppers from Turkmenistan. It cited concern over vegetable imports being infected with the brown rugose fruit virus as the reason.

This is disappointing for a burgeoning tomato-growing sector of which Turkmen authorities are inordinately proud (and in which Serdar Berdimuhamedov has taken some direct interest, incidentally), but it is hardly a surprise. Russia’s agricultural watchdog has been ringing the alarm about the Turkmen problem with brown rugose fruit virus since February.

Viruses are giving Turkmenistan no peace. While the government continues to stick to the lie about having no cases of COVID-19, reality is often unavoidable.

The UCI, cycling’s international ruling body, announced on June 3 that a Track Cycling World Championships event that had been due to take place in Ashgabat from October 13-17 has been cancelled at Turkmenistan’s request over COVID-19 concerns.

Berdimuhamedov gave himself a bit of a consolation treat that same day, which also happened to mark World Bicycle Day, by leading a cycling marathon across the capital. State television showed the president riding, often completely alone, on deserted roads lined by hundreds of members of the public made to applaud and perform song-and-dance routines.

The cynics at the website Cycling Tips summarised the day cruelly with the headline “A sad dictator rides through Ashgabat on World Bicycle Day.”

“Something seems different about the dictator’s demeanour this time around,” the website opined in its detailed account of the proceedings. “He looks a bit pissed off, like he had a World Championships taken away from him for reasons that he doesn’t totally agree with, or because of a virus he refuses to acknowledge.”