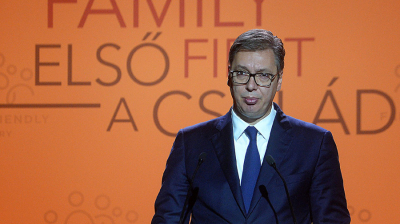 Aleksandar Vucic, President of the Republic of Serbia / Presidency of Serbia
By bne IntelliNews August 17, 2021

Labels on state-affiliated accounts provide additional context about accounts that are controlled by certain official representatives of governments, state-affiliated media entities and individuals closely associated with those entities, the Twitter guidelines say.

The accounts of the state RTS (Radio televizija Srbije), the state RTV (Radio televizija Vojvodine), privately-owned TV stations Pink, Prva, B92 and Happy have been labeled state-affiliated as has the Tanjug news agency and the Kurir, Informer and Srpski telegraf tabloids and Politika daily newspaper, according to TV N1.

Serbia's Ministry of Culture and Information said on August 17 it was surprised by Twitter's decision to label several media as state-affiliated. The ministry added it did not go into what made “this multilingual site to go from exchanging opinions and freedom of speech, which they vow is their job, to censorship of certain media in our country”.

According to TV N1, Serbia’s President Aleksandar Vucic said that he couldn’t “wait to have his Twitter account shut down, to be another [former US President Donald] Trump in the world. To be clear that Taliban spokespersons have free access to that social network… I congratulate all the media which resist that obedient network and who spread liberal aspirations and ideas. I wish them much success.”

“They [the US and UK] finance the Voice of America and the BBC but don’t label them as pro-government media. What’s wrong with cooperating with the government. What should they do? Cooperate with thieves and those who robbed Serbia as some other media do?” Vucic said, N1 reported.