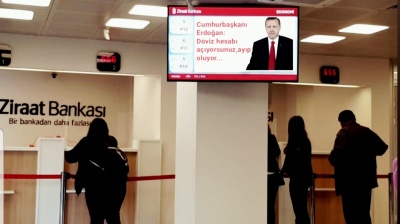 President Erdogan: "You're opening FX accounts, there ought to be a law..." (Image and joke by Zaytung.com)
By Akin Nazli in Belgrade March 25, 2021

Twitter has decided to establish a legal entity in Turkey to comply with the country's new stringent social media law, legislation that applies to social media platforms that have more than 1mn daily users based in Turkey. The move was announced by the company said on March 20.

If Twitter did not appoint such a representative, in April the bandwidth of the company in Turkey would be throttled by an initial 50%. In May, non-compliance with the law's demand for such an executive would see the throttling stepped up to 90%.

Together with Twitter, all the leading social media companies have by now agreed to comply with the law, approved in July last year. It came into effect last October.

Prior to the advertising ban, Facebook, Google’s YouTube, the US’s Netflix and Amazon, along with China’s TikTok, France’s Dailymotion, Russia’s VKontakte and LinkedIn had already appointed Turkey representatives.

Facebook has around 37mn subscribers in Turkey, a country of 83mn. The Facebook personnel that deal with Turkey are based in London.

Twitter has 14mn users in Turkey, while the country is among TikTok’s largest markets, providing it with around 30mn subscribers.

The number of Netflix subscribers in Turkey rose to more than 3mn in December from around 1.5mn in 2019.