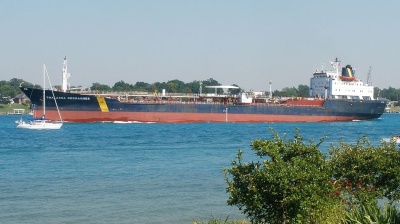 The MV Asphalt Princess photographed when it was named Thalassa Desgagnes. In 2017, the vessel was sold and renamed.
By bne IntelIiNews August 3, 2021

An incident in which Iranian-backed forces were late on August 3 suspected of being behind the hijacking of a tanker off the coast of the United Arab Emirates in the Gulf of Oman is over, according to an update issued by the British navy’s United Kingdom Maritime Trade Operations (UKMTO) on August 4.

A group of armed men who boarded the ship have left the vessel, the UKMTO said, without elaborating but simply stating the “incident [is] complete”.

It was not immediately clear or confirmed who was responsible for what was described as an attempted ship hijack, or what ship was targeted.

UKMTO the previous evening reported a “potential hijack” by eight to nine armed individuals about 61 nautical miles east of the Emirate of Fujairah. The BBC reported Lloyds List Maritime Intelligence as confirming that a Panama-flagged ship, the MV Asphalt Princess, was hijacked by armed men in the Gulf of Oman and ordered to sail to Iran. The tanker was reportedly heading into the congested approach to the Strait of Hormuz. Around a fifth of seaborne oil exported to world markets passes through the strait. Iran only last week celebrated opening a terminal from where tankers can head directly out to the Indian Ocean, meaning Tehran can now export oil without having to negotiate the Hormuz chokepoint.

The incident also occurred just two days before hardline cleric Ebrahim Raisi is due to be inaugurated as Iran’s president.

Maritime security analysts at Dryad Global and Aurora Intelligence said the Asphalt Princess was travelling to Sohar, a port on Oman’s northern coast, when it was intercepted.

In a statement after word of the incident broke, the UK Foreign Office said it was “urgently investigating an incident on a vessel off the UAE coast”. The US State Department said it was “too early to offer a judgment” on the incident.

Iran's Islamic Revolutionary Guard Corps (IRGC) dismissed the reports of Iranian involvement in an apparent hijacking as a pretext for "hostile action" against Tehran. “According to information from security sources, Iran’s armed forces and all branches of the Islamic Resistance in the Middle East have nothing to do with the incident in the Gulf of Oman,” the IRGC said in a statement carried by Iranian state TV’s website.

Iran's foreign ministry warned against any attempt to "create a false atmosphere" against Tehran.

The incident comes less than a week after an oil tanker operated by an Israeli-owned company was attacked by a drone off Oman. The attack left two security guards, one British and the other Romanian, dead. The US, UK and Israel blamed Iran for the attack. Tehran strongly denied playing any role.

BBC security correspondent Frank Gardner said the MV Asphalt Princess was owned by a Dubai-based company that had one of its ships hijacked two years ago by the IRGC.

Earlier on August 3, four oil tankers in locations not far from the Asphalt Princess reported that they were "not under command". Such a report usually means a vessel has lost power and cannot steer. One of the ships later began moving, The Associated Press reported. It was not clear if the episode relating to the oil tankers was linked to the events involving the Asphalt Princess.