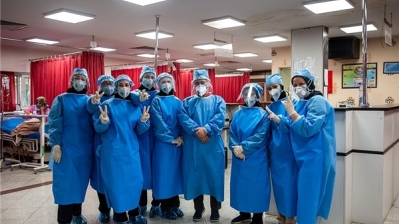 Iran claims US sanctions have left its hospitals under-resourced amid the pandemic.
By bne IntelIiNews March 18, 2020

The UK is reportedly privately pressing the US to ease sanctions on Iran to help it fight the growing coronavirus (COVID-19) outbreak that has already officially claimed 1,135 lives in the country and, according to the World Health Organisation (WHO), may have claimed five times more.

However, the reluctance of Washington to relax its maximum pressure campaign on Tehran is shown by reports quoting European sources that the US may be preparing to use its veto on the International Monetary Fund (IMF) board to block an application lodged by Iran for a $5bn emergency loan to help it battle the COVID-19 crisis that has gripped the Islamic Republic. China on March 16 called for the US sanctions to be immediately lifted, saying continued sanctions were “against humanitarianism”.

Iran, which has published a list of the supplies that it lacks in the fight against the spread of the virus, has warned that its hospitals are badly under-resourced and overstretched. Though US sanctions do not directly target humanitarian supplies to the country, they throw up financing and transactional hurdles and deter parties, who rightly or wrongly fear getting hit by secondary sanctions, from getting involved in business deals with Iran for the delivery of medicines, medical equipment and food.

Iran has the world’s third worst coronavirus epidemic, behind those of China and Italy. It has recorded 17,361 infections. A total of 147 infected people have been recorded as dying in the past 24 hours, a new daily record.

On March 17, state television quoted the results of a computer simulation conducted by academics at the presitigious Sharif University of Technology in Tehran that predicts that there could be as many as 3.5mn CORVID-19 deaths in Iran if the authorities cannot get a grip on the crisis by the end of May. The best of three possible simulated outcomes, resulting in 12,000 deaths from 120,000 infections, would require officials to have much more success in suppressing the virus with social distancing, citywide quarantines, improved medical supplies and other breakthroughs and measures.

The Trump administration has said medical supplies are available to Iran through a new Swiss humanitarian vehicle approved by the US. However, the Guardian reported on March 18 that UK officials fear this involves so many conditions as to be ineffective.

US Secretary of State Mike Pompeo said last week that “any nation considering humanitarian assistance to Iran should seek the release of all dual and foreign nationals” from Iranian prisons.

March 17 saw Iran release 85,000 prisoners on temporary release to help avoid an explosion of infections in crowded jails. Among them was Nazanin Zaghari-Ratcliffe, an Iranian-British dual national accused of activities aimed at toppling Iran’s clerical establishment, which she denies. She was released with an electronic ankle tag on a two-week furlough and banned from moving more than 200 metres from her place of residence.

Zaghari-Ratcliffe’s husband, Richard Ratcliffe, said after her release: “This is a global crisis that affects everyone. Fundamentally there is nothing like a crisis for actually reminding everyone of what is important and what is not. What it means is that some of the old disputes can be settled through humanitarian routes.”

He added: “It would make such a difference if the UK was to provide more medical, humanitarian and drug supplies to Iran.” The coronavirus pandemic, and the repeated Iranian requests for outside medical and financial help, “provided a very different context in which the two countries could operate”, he noted.

The Iranian embassy in London said in a statement: “The fight against such an epidemic crisis requires, however, the mobilisation of all resources at the national and international levels to ensure the benefit of all mankind. We need to work hand in hand to overcome the disease.

“In Iran, thousands are suffering from the virus and millions are self-quarantined, hospitals are overstretched as doctors and nurses and the whole health systems courageously and tirelessly trying in fullest capacity to serve the people.

“Iranian officials, however, since the inception of the national mobilisation to fight the virus in recent weeks, have been facing serious challenges. But above all, the US illegal unilateral sanctions have impeded the governmental and non-governmental institutions to ensure access of the people in need to all medical and health requirements in fighting coronavirus.”

In a letter to world leaders sent at the end of last week, Iranian President Hassan Rouhani said Europe and Iran were involved in the same struggle. “There is no doubt that in the face of a dangerous global epidemic, Tehran and Qom are not far from Paris, London and New York, and any policy that weakens the economic structure and medical system, and limits financial resources for crisis management, will have direct effects on the fight against the epidemic in other countries.”