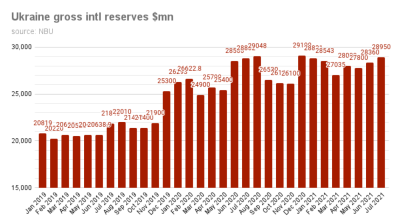 Ukraine’s gross international reserves increased by $0.59bn, or 2.1%, to $28.95bn in July, the National Bank of Ukraine (NBU) reported on August 5. The growth was prompted by receipts from the placement of international Eurobonds, coupled with the NBU’s interventions at Ukraine’s ForEx market.

The net purchase of foreign currency by the NBU at the ForEx market amounted to $188mn in July.

The NBU also reported a $157mn increase in the value of its securities portfolio. As of August 1, Ukraine’s gross reserves amounted to 4.1 months of imports, the NBU said.

Russia's services PMI falls for second month due to impact of coronavirus
5 hours ago
Romania’s industrial prices surge by 26.8% y/y in October
6 hours ago
Service sector and public spending save Hungary’s Q3 GDP
1 day ago
Kazakh manufacturing PMI shows return to contraction in November
1 day ago
Poland’s PMI climbs to highest point since August
1 day ago