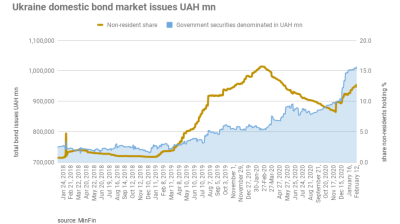 Foreign investors have bought up a 12.2% share of Ukraine's domestic bond issues and there is no sign of them slowing down.
By Ben Aris in Berlin February 24, 2021

Foreign investors piled into Ukrainian local debt when the market was hooked up to the international capital markets in April 2019. The reform was a stunning success, handing the government $5bn worth of fresh capital and a significant new tool for funding the budget.

Then the multiple crises hit at the end of the first quarter of 2020 and there was a crowded rush for the exit. The foreign investors' share of the issues had risen to just over 15% of the total outstanding, but between February and November there was unmitigated selling that brought that share down to around 8%.

With Ukraine’s $5bn stand-by agreement (SBA) with the International Monetary Fund (IMF) frozen, the sell-off of the Ukraine’s Ministry of Finance hryvnia-denominated OVDP treasury bills (OVDP) is a big problem. The government is running a large budget deficit it can't really afford and has a heavy $16bn debt redemption schedule in 2021. It was counting on being able to raise $4bn-$5bn on the local markets this year.

Happily, the post-coronavirus (COVID-19) relief rally kicked in following the announcement of several vaccines and investors have now returned. In the last few months the inflows of fresh investment has lifted  their share of the market to a total of UAH123,084mn ($4.405bn), or 12.2% of the total outstanding as of mid February. Ukraine's bonds are back.

Investors can’t resist the OVDPs. In the zero interest world, the Ministry of Finance's decision to hike the yields on the bonds to 10%-12%, depending on maturity, has bond traders salivating. And despite the political brouhaha that never ends in Ukraine, the macroeconomic situation has improved enormously in the last two years. Inflation has fallen to post-Soviet lows, forex reserves have risen to give 4.4 months of import cover (a comfortable level), the banking sector is healthy and Ukraine ran a large trade surplus in 2020 thanks to booming commodity prices (it's a big exporter of steel).

The only really big unresolved issue is the frozen IMF programme. The government is okay for now, but with peak redemptions of $11bn in the third quarter of this year the government can’t meet its obligations without digging deeply into its reserves and possibly sparking a currency crisis.

“A slowdown in structural reforms and slow progress in negotiations with the IMF put a drag on economic performance and may deteriorate risk metrics in the medium term,” ICU said.

However, the market seems to be assuming Kyiv will do what it usually does: take it down to the wire, cave in on some of the IMF’s key demands and cut a deal at the last minute. That is what it has done multiple times in the past.

And there is a chance that the government could get through the second half of the year without the help of the IMF. Wages are rising, albeit from a low base, and the boom in commodities seems highly likely to continue: iron prices, for example, one of Ukraine’s main export products, hit nine-year highs on the London Metals Exchange (LME) in January and analysts upgraded their outlook for prices from $60 per tonne to $170 for the rest of this year – record levels.

That will only add to the National Bank of Ukraine (NBU) reserves, thus creating more of a cushion than it currently enjoys. As of 1 February 2021, Ukraine had an equivalent of $28.821bn in international reserves.

“Ukraine's external balances continue to benefit from favourable terms of trade and restrained travel, as well as from recovering portfolio inflows. This helps the NBU to further rebuild its FX reserves, which reached $29bn at the end of 2020, the highest level for the last eight years,” ICU said. “Thanks to favourable seasonality and external conditions, and consistency of NBU’s FX policy, by mid-2021 the hryvnia may strengthen even more than assumed in our forecast (UAH27/$). By the end of the year, we see the currency close to current levels (UAH27.5–28/$).”

ICU says that there is “massive potential” for more inflows into the OVDPs with the improving macro conditions acting as a pull, but the extremely low interest rates everywhere else act as the push.

The government is game on too, as after pushing up the yields at the start of the year to tempt investors back into the market after last year’s sell-off, the demand has gathered momentum and is now so strong that the ministry is squeezing yields back down again.

“Demand at the weekly auctions of the Ministry of Finance remains strong, and oversubscription since mid -January led to a slight decrease in yields, most notable at the front end of the curve. Meanwhile, still elevated fiscal needs restrain the MoF from aggressive cutting of interest rates,” says ICU. “By end-2021, we now see room for 1Y bond yields in Ukraine to lower slightly to 11%, while 2Y bond yields should hover close to the current level of 11.7%. Even accounting for growing inflation expectations, such rates provide good opportunity for a carry trade given still manageable FX and credit risks.”

In addition to the dangers posed by the stalled IMF programme, inflation has returned and has risen from a post-Soviet low of 2.1% in April last year to start this year at 6.1% in January. That worries analysts who say that string of deep rate cuts made by the NBU over the last two years has ended and there is a danger that the regulator may start hiking rates this year to tame inflation again.

Discounting the risks due to Ukraine’s highly unstable politics and focusing just on the economic arguments, the outlook for Ukraine’s local bond market looks very attractive. It compares very well with its frontier and emerging market peers, and provided it doesn't score yet another own goal in the political arena, the market should do very well this year.

“Ukraine's local debt looks highly competitive versus emerging and frontier market peers. The main high-yielding competitors of Ukraine are Egypt, Turkey, Georgia, Armenia and a few sub-Saharan African countries such as Kenya and Uganda. However, except Egypt and Turkey, these are niche markets with low liquidity,” says ICU. “Compared with Egypt, Ukraine has [a] less overcrowded local bond market and better debt, fiscal and external account metrics, although [it] lacks [a] properly working IMF programme. Turkey offers a good investment opportunity in 5Y bonds; however, the case crucially depends on the central bank's ability to regain control over inflation and monetary stability, which was not the case in the last decade.” 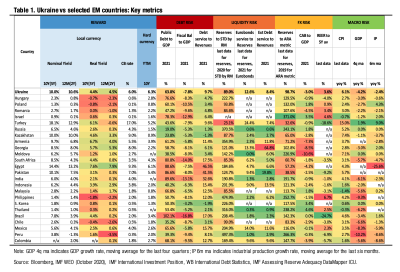 Belarus' gold and foreign currency reserves rose 4.9% to $7.3bn as of May 1
Ukraine's international reserves increased to $28bn as of the start of May
Ukraine’s consumer price inflation slowed to 8.4% in April