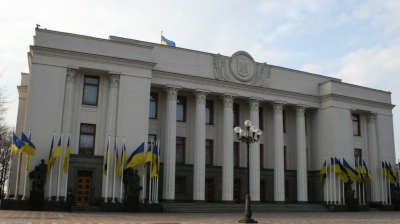 The Ukraine parliament has notoriously been full of oligarch placemen.
By Cameron Jones in London September 23, 2021

Ukrainian MPs have voted to approve a bill to restrict the influence of oligarchs on Ukrainian political life. The bill forbids oligarchs to make contributions in support of political parties and to participate in large-scale privatisations, and forces them to disclose their assets.

The parliamentary vote demonstrates the belated determination of President Volodymyr Zelensky to take on the country's most powerful businessmen, including his former patron Ihor Kolomoisky.

The overwhelming majority of votes for the bill was given by the presidential party Servant of the People, with 229; other votes came from For the Future, 18; Trust, 15; and Voice, 11. However, 23 MPs from the party Eurosolidarity and 20 from OPZZh were opposed.

The vote came the day after an assassination attempt against one of the president’s top aides, which some people claimed was a warning shot against the  bill.

An oligarch is a person who has significant economic and political weight in public life. An oligarch will be a person who meets at least three of the criteria prescribed by law:

The National Security and Defence Council, which in March “identified 13 oligarchs,” will also take care of the register of oligarchs.The register will indicate the data on the oligarch, his assets and the list of politicians in whose work he is involved.

If a person is on the list of oligarchs, a number of restrictions are applied to him. In particular, it will be forbidden to stand for public office, make contributions in support of political parties and participate in large-scale privatisation. Also, persons from this register will have to submit a declaration of income.

In addition, the law introduces the concept of "declaration of contacts". The oligarchs would be obliged to submit a list of all civil servants they or their representative have been in contact with. At the same time, it will be possible not to file such a declaration if the meeting with the oligarch was on television, in a court hearing, or at events initiated by public authorities. The law also obliges oligarchs to report before a meeting with civil servants that they are included in the Register of Oligarchs.

Relevant requirements are also provided for the submission of a "declaration of contacts". If a person does not file such a declaration, he or she may be held politically or disciplinary liable.

Stork's Nest case to return to haunt outgoing premier as he heads for opposition benches.

A few months ago, the country was flooded with miners from China.

Poland and the EU ratchet up judicial dispute

Lockdown in Latvia planned from October 21