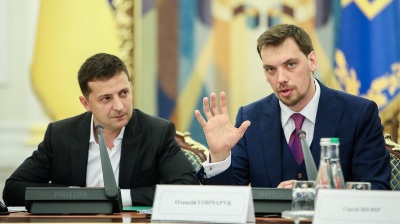 Ukrainian President Volodymyr Zelenskiy refused to accept Prime Minister Oleksiy Honcharuk resignation tendered last week and decided to give him "a chance if you resolve some things that are very important today and are of concern to our society", Zelenskiy said during a meeting with the premier on January 17.

In particular, the government must present to Zelenskiy "a new concept of salaries of heads of ministries, departments, state-owned enterprises and their deputies, taking into account the situation in the country".

"This should be a normal salary. We understand that these are highly qualified experts, but I want to have a shared opinion with you and the ministers that such salaries may be in Ukraine today in a situation in which our economy is. When you and your government raise the economy, it will be possible to raise the wages," the presidential media office quoted him as saying.

On January 17, Honcharuk said he filed the letter of resignation to the president in order to prevent any speculations about disrespect of government members for the chief of state. The PM added, however, that he and his cabinet are going to work "as usual" until Zelenskiy has took "a political decision".

Zelenskiy added that those ministers who would not agree to work for the salary proposed by the government would have to say goodbye. "Wages should be normal, so that one can live normally, and should be in line with the status of officials," the President said.

He also set a task to resolve the situation with the bonuses provided to the top executives of the nation's state-owned monopoly Naftogaz of Ukraine for receiving compensation from Russia's Gazprom.

"They must not only be pragmatic managers, but also remain people, find a way out of this situation. If they do not hear you, then they will hear people, lawyers. Or we will reboot Naftogaz completely. And we have to work out a strategy of doing that," Zelenskiy said.

The next day, the cabinet made public the information on the salaries of government members in 2019. The information was posted on the government's website. Prime Minister of Ukraine Oleksiy Honcharuk received UAH76,000 (around $3,120) in December 2019, including increments in the amount of UAH40,000 and a UAH36,190 bonus. The average salary of the prime minister in 2019 was UAH60,479.

Deputy Prime Minister, Digital Transformation Minister Mykhailo Fedorov received UAH84,887 in December 2019, including increments in the amount of UAH35,506 and a UAH49,381 bonus. His average salary in 2019 was UAH55,664.

In addition, the president stressed the importance of strengthening the government through personnel changes. "I have no reason to think that any of them is dishonest or unprofessional. I remember how you picked this government, how we communicated with you and with them, how we saw their strategy and their team. But we want to strengthen the government. Therefore, I ask you to find weaknesses and to replace the heads of ministries according to their professional data," he said.