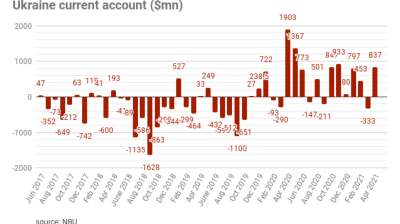 Booming commodity prices helped push Ukraine's current account to a healthy surplus in April from a deficit the month before.
By bne IntelliNews June 2, 2021

Ukraine’s current account (C/A) switched to a surplus of $837mn in April, from a $333bn deficit in the prior month, due the positive balance in trade and primary income, the National Bank of Ukraine (NBU) preliminarily reported on May 31.

“Ukraine’s external trade continued to boom in April, and the reinforced quarantine restrictions during the month apparently were not an obstacle. The export receipts are ballooning amid an incredibly favourable global price situation for iron ore and ferrous metals. The growth of other Ukraine’s export items is also strong, and this is not only the result of the low comparative base of the previous year,” Evgeniya Akhtyrko of Concorde Capital said in a note.

The financial account was almost balanced out in April with a minor deficit of $43mn, vs a deficit of $382mn in March. In particular, the net foreign currency inflow from the operations of the government sector amounted to $941mn, reflecting the receipts from the placement of international Eurobonds for $1.3bn. At the same time, the net outflow under the trade loans amounted to $664mn, and the net outflow from the banking sector was $203mn.

The surplus of Ukraine’s balance of payments amounted to $795mn in April (vs. a $713mn deficit in March).

“Goods imports in money terms in April were lower than the March peak. However, the demand for imports is recovering quickly. This trend is not intimidating as long as the price situation at the external markets for Ukraine’s exports remains favourable. However, if the latter changes, we might see a faster enlargement of the goods trade balance resulting in worse C/A balance than we currently expect,” Akhtyrko added. “According to our forecast, the surplus of Ukraine’s C/A will amount to $0.5bn (vs. a $6.2bn surplus in 2020).”

The sector's net profit in August amounted to RUB244bn with a return on capital of 26% in annual terms. The profits were 7% more than the July result of RUB229bn.

The inflation of Russian consumer prices has soared to uncomfortable highs, but those of producer prices have grown even faster, although the pace of growth has slowed somewhat in the last two months.

Montenegro’s GDP growth was much higher than the EU average of 14.2%, as it recovered from a steep contraction in 2Q20.

The Russian physicist and election statistics expert Sergey Shpilkin has released another two charts on voting patterns in the recent Duma elections that show a “comet effect” and a “Moscow blob”.

Russian banks extend profits in August, on track to earn a record RUB2.5 trillion this year
8 hours ago
Russia’s PPI inflation up 1.5% to 28.6% in August
23 hours ago
Montenegro’s economy posts strong 19% y/y growth in 2Q21, higher than EU average
2 days ago
Russia’s Duma elections statistics: the comet effect and the Moscow blob
4 days ago
Romania and Latvia's car ownership rates among lowest in Europe
4 days ago