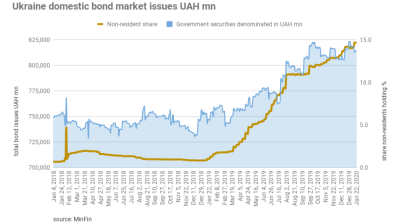 Ukraine’s domestic bond market got off to a strong start in 2020 as heavy bidding at the weekly auction on January 22 depressed yields to 10%.

A year ago Ukraine bonds were yielding 19%. The Ministry of Finance continues to squeeze bonds by limiting supply to push down yields further, and will introduce new 7-year bonds in January.

There was heavy bidding at the weekly auction for hryvnia bonds on January 22, where demand was double supply, the Finance Ministry reports.

In the same week Ukraine issued €1.25bn in 10-year euro-denominated Eurobonds at the low rate of 4.375% per annum; this was six-times oversubscribed as yields on Ukraine's sovereign debt also tumbled.

This low interest bond deal will save Ukraine $2mn a day, Prime Minister Honcharuk posted on Telegram after the news broke at Davos. “Our government has inherited a heap of insane debt,” he wrote. Referring to a $20bn a year load, he wrote: “Servicing the national debt is the largest item of expenditure from the State Budget. It will average UAH484bn a year by 2022. That is why we have placed Eurobonds at the cheapest interest rates in the history of Ukraine. In simple words, we replace debts - we give away expensive ones, and we take much cheaper ones.”

The attraction of the bond market will continue as the National Bank of Ukriane is expected to slash rates next week by 200 basis points or more, ICU writes: “Generally, current conditions seems to have put rates very close to the bottom, and a further decline in the NBU key policy rate will not have significant impact, especially at the long end of yield curve, where demand is mostly seen from foreign investors.”

International bond investors are selling off local EM debt in all but the best markets
Ukraine's statistics service confirms 11.4% GDP drop in Q2
Zelenskiy's rating down by a quarter in just three months

Exit polls and partial results show Save Romania Union and its ally Plus are heading for victory in local elections in several first-tier cities, as they become a major force in Romanian politics.

The violence at the Sunday mass rallies in Belarus went up yet another notch on September 27 when masked OMON officers used stun grenades against protesters, liberally doused the crowd with pepper stray and fired multiple shots into the air.

Poland’s last two coal mines will cease operations in 2049, according to an agreement reached by the country’s powerful mining unions and the right-wing populist government.

Major fighting erupts between Armenia and Azerbaijan over Nagorno-Karabakh

Both sides accuse each other of starting clash. Russia calls for immediate ceasefire. Turkey pledges to stand by Azerbaijan.