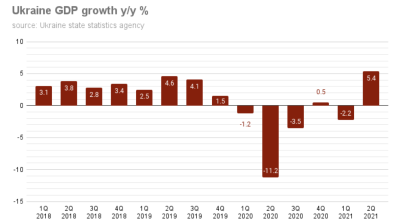 Ukraine’s economy fell back into recession in the second quarter on a q/q basis as growth slows, but on an annualised basis growth was up 5.4%, less than analysts were expecting.
By bne IntelliNews August 17, 2021

Ukraine’s economy fell back into recession in the second quarter of this year as the fallout from the pandemic and soaring inflation that caused the National Bank of Ukraine (NBU) to dramatically hike interest rates start to weigh on growth.

GDP shrank by a seasonally adjusted 0.8% q/q in the second quarter after falling 1.2% q/q in the previous three months, preliminary data released by Ukrstat showed on August 16.

However on an annualised basis GDP growth was positive, advancing by 5.4%, up from -2.2% y/y growth in the first quarter, although the second quarter growth was less than the 7.3% y/y increase analysts were expecting.

The fly in the ointment has been inflation which has come roaring back this year and broke above 10% for the first time in years in July to reach 10.2%, after the NBU had effectively crushed inflation in the summer of 2020 when it briefly dropped below 2%.

In response the NBU was forced to put through a series of large and growth-killing rate hikes — March (50bp), April (100bp), flat in June and July (100bp) — in an attempt to bring price rises back under control.

During the same quarter, basic sector output growth, which is a rough proxy for GDP growth, was mainly attributable to improvements in retail trade, industrial output and construction, all thanks to a low base.

Basic sector output growth peaked at 18.3% y/y in April, mainly due to the low base effect, before slowing to 4.1% in May and 1.7% in June. The slowdown was evident in most of the largest sectors, including industrial production, retail trade and agriculture.

“In 1H21, GDP growth reached 1.7% y/y. We expect the economy to continue to see modest growth this year and the annual number to come in at around 1.5%,” Sova Capital said in a note.