Ukraine’s economy takes off? Economic growth jumps to 4.6% in 2H19 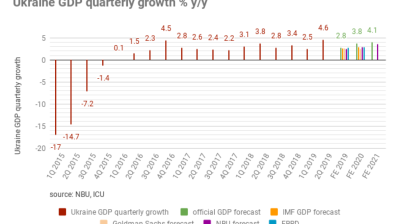 Ukraine-watchers were a abuzz on August 14 after the government announced economic growth surged in the second quarter, growing by 4.6% the nation's state statistics service Ukrstat reported on August 14, well ahead of even the most optimistic expectations.

“Time for the Ukrainian economy to take off as inflation has stabilized with minimal budget deficit & strict monetary policy. The hryvnia exchange rate has risen as desired to keep labour in Ukraine. Finally, we see reasonable growth, but property rights must be secured,” Anders Aslund, economist and a Senior Fellow at the Atlantic Council, said in a tweet.

The strong gain was driven by a bumper grain harvest and soaring grain exports that allowed Ukraine to overtake Russia as the biggest exporter of grain in the world for the first time in three years.

Rising consumption and slowly recovering income levels also contributed to growth, as the economy stabilises after collapsing in 2015-2016.

The 4.6% growth was well ahead of the 2.7% Reuters consensus for growth and was also up strongly on the 2.5%% growth in the first quarter. The country's real GDP in the second quarter of 2019 (taking into account the seasonal factor) increased by 1.6% quarter-on-quarter.

Although Ukraine’s economy is recovering from its recent crisis, it has been growing well below potential and should have grown faster given the depth of its previous fall.

The strong results will add to the growing optimism that has come with the election of Ukrainian president Volodymyr Zelenskiy and his Servant of the People (SOTP) party that both won landslide victories this year on the promise of change.

If Zelenskiy is lucky then the increased optimism will start a virtuous circle of investment-profits-pay rises-consumption turning that drove Russia’s boom years in the noughties and allow Ukraine to final capture some of its “catch-up” potential. Ukraine is the only major country in the Former Soviet Union (FSU) that has not been through this process and remains the poorest country in Europe as a result.

In July, the National Bank of Ukraine (NBU) revised its economic growth forecast for 2019 to 3% y/y compared with its April macroeconomic forecast of 2.5% y/y. The NBU also revised its 2020 economic growth forecast to 3.2% y/y from 2.9%. The revisions were attributed to "stronger domestic demand, more favorable terms of trade and expectations of a larger harvest of grain crops".

Domestic demand will remain the main driver of economic growth over the coming years. Private consumption growth will decelerate, albeit remaining high owing to an increase in real household income - wages, pensions and remittances from abroad. Capital investment will continue to expand rapidly, which will also provide significant support to the economy, the NBU added.

On this score Ukraine will follow it neighbours to the were the countries of Central Europe have managed to shake off the effects of a notable economic slowdown in “old Europe” thanks to their strong domestic demand that held up growth, bne IntelliNews reported yesterday. Ukraine has already started re-orientating its economy from Russia to the west, but linking itself to these dynamic economies just across the boarder will help lift Ukraine.

But economic growth will be dampened by weak global economic activity and a decrease in gas transits to "European countries starting in 2020, due to the construction of bypassing gas pipelines," the statement reads.

Ukraine faces a potentially debilitating with Russia’s Gazprom this winter. Its gas transit contract expires that could mean the Russia stop transiting gas to their European clients via Ukraine in a move that would cost the country some $3bn a year, or 3% of GDP. Ukraine has been pumping gas into underground storage at record levels to prepared for its coming gas war, the national gas company Naftogaz told bne in an exclusive interview.

The same month, Prime Minister Volodymyr Groysman said that the Ukrainian government forecast economic growth of over 3% y/y in 2019.

The International Monetary Fund (IMF) has kept its forecast for Ukraine's GDP growth in 2019 and 2020 unchanged at 2.7% y/y and 3% y/y respectively.

The European Bank for Reconstruction and Development (EBRD) has revised downward its forecast for the growth of Ukraine's real GDP in 2019 to 2.8% y/y from 3% y/y. The multinational lender's also forecasts that the nation's economy to expand by 3% y/y in 2020.

The EBRD believes that large payments on public debt scheduled for 2019-2020 pose a serious risk to the economic development of Ukraine. Therefore maintaining co-operation with creditors remains vital for the recovery of the country's economy.