Ukraine’s industrial output increased 5.4% y/y in May, down from 13% in April 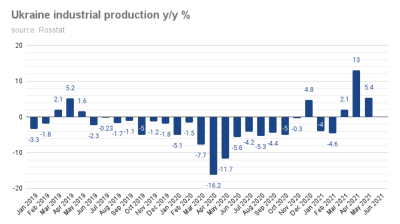 Ukraine’s industrial output increased 5.4% year on year in May, slowing from 13.0% y/y growth in April, the State Statistics Service reported on June 24. Seasonally adjusted output declined 3.0% month on month in May.

“It looks like it’s going to be quite a long road to recovery for Ukrainian industry after the pandemic's havoc. The output growth in May doesn’t look impressive at all given the very low comparative base of the previous year (-12.5% y/y),” Evgeniya Akhtyrko of Concorde Capital said in a note. “The growth in metallurgy and machinery was quite good, but it was blurred by a significant decline in food and pharmaceuticals output. The recovery in mining is continuing, prompted by good demand for iron ore. We expect industrial output to increase around 4% y/y in 2021 (vs. a 4.5% y/y decline in 2020).”

Prices of bread and flour products in Kosovo jump by up to 50%
15 hours ago
Bank lending in Georgia up 12.9% y/y at end-September
15 hours ago
National Bank of Ukraine leaves key policy rate unchanged at 8.5%
17 hours ago
Kazakh industrial output up 2.7% in first nine months
4 days ago
Slovak unemployment rate at 7.09% in September
4 days ago