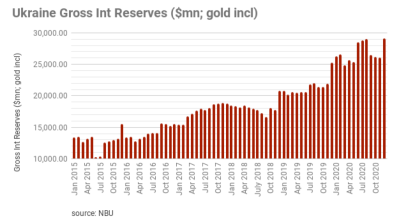 The net international reserves of Ukraine as of January 1 amounted to $18.1bn, which is 19% more than at the beginning of December 2020 ($15.2bn), Head of the Council of the National Bank of Ukraine (NBU) Bohdan Danylyshyn said, Interfax Ukraine reported on January 12.

"The net forex reserves of the NBU [excluding the debt to the IMF] as of January 1, 2021 amounted to $18.1bn and are sufficient to cover payments by the public sector and the National Bank on external debt to non-residents, which in 2021 will amount to about $7.2bn," he said on Facebook as cited by Interfax.

Danylyshyn added that of the external debt to non-residents, about $2bn should be paid by the government on Eurobonds in September 2021, as well as to cover the current account deficit, which, according to the NBU forecast, is anticipated to be $3.5bn in 2021.

While reserves are currently at an eight-year high, the government is going to struggle to meet its debt repayment obligations in 2021. Gross international reserves (GIR) have been boosted in the last month as the government has started to actively accumulate resources to deal with a spike in debt redemptions and is taking advantage of the current benign borrowing conditions.

Ukraine will spend $20bn this year to repay principal and pay interest on its public debt, according to Finance Ministry figures. About 72% will be for repaying domestic debt and 28% on repaying foreign debt.

Peak payment months are: March $2.5bn; June $2.7bn; and September $3.6bn. About 25% will go on interest payments, and 75% for repaying principal, the Ministry posted two weeks ago on Facebook.

One of the biggest creditors to the country is the International Monetary Fund (IMF) that has just agreed to restart its assessment of Ukraine’s economy – a prerequisite for reactivating the stalled $5bn stand-by agreement (SBA).

The volume of planned payments of the state in favour of the IMF in 2021 is about $1.6bn, including $1.36bn for the repayment of the principal amount of the debt and $260mn for interest payments.

"The need to refinance Ukraine's debt to the IMF requires the parties to fulfil their obligations under the current stand-by arrangement, which will allow Ukraine to attract IMF financing of about $2.9bn," he said.

Restarting the IMF programme – which is unlikely to happen until the summer, believe experts – will re-open the doors to the international capital markets and other international financial institution (IFI) funding and allow Ukraine to cope with its debt repayments.

He added that taking into account payments on the debt of banking and corporate sectors, as well as inter-company debt, the total volume of payments from Ukraine in favour of non-residents in 2021 will be about $15.5bn.

Russian President Vladimir Putin's popularity ticked up 1pp from 64% in January to 65% in February according to the latest poll from independent pollster the Levada Center, regaining the levels prior to Navalny's demonstrations.

There was a remarkable upswing in business confidence in January, according to Rosstat’s monthly survey. The confidence level rose to -1, its highest level since May 2019, marking a return to pre-coronacrisis levels.

Russian President Vladimir Putin’s trust rating improved by 3 percentage points to 32%, while that of jailed anti-corruption activist and opposition politician Alexei Navalny fell by one point to 4% in between December 2020 and February 2021.

Public indebtedness increased amid the government's efforts to support the private sector and address the health crisis.

Research by Sarajevo-based Center for Policy and Governance shows high levels of undeclared and partially work in Western Balkans and Croatia.

Russian President Vladimir Putin's popularity ticked up 1pp in February to 65%
8 hours ago
Russian business confidence bounces back strongly in January
9 hours ago
Putin’s trust rating improves 3pp to 32%, Navalny falls 1pp to 4% despite protests
2 days ago
Romania’s public debt-to-GDP ratio up 12.4pp y/y to 47.7% at end-2020
3 days ago
Grey economy almost a third of GDP in Bosnia, Montenegro and Serbia
4 days ago