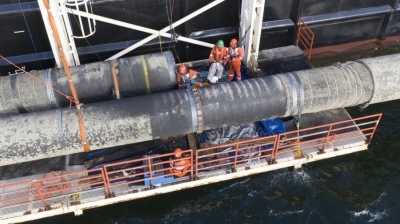 Ukrainian energy company Naftogaz has filed a request with German regulator BundesNetzAgentur (BNetzA) for permission to participate in the certification of the Nord Stream 2 pipeline, Naftogaz Executive Board Chairman Yuriy Vitrenko announced on October 17 in a press release.

“As a national company which defends national interests and leads the fight for Ukraine’s energy security, Naftogaz submitted a request to German regulator BNetzA to participate in certification proceedings on Nord Stream 2. Our position is that Nord Stream 2 cannot be certified because it does not fully comply with European legislation,” he said.

Nord Stream 2 was completed in September and Russia’s gas giant Gazprom announced on October 18 that the pipeline has been loaded with technical gas and is ready to go into operation.

Gas prices have soared as a result of “V” shaped market that went from a gas glut in 2020 to being unable to meet soaring demand in 2021, as bne IntelliNews reported. Ukraine also claims that Gazprom is withholding gas from transit via Ukraine in order to drive up prices and put pressure on the EU to accelerate the certification of Nord Stream 2, which is only scheduled to happen in January.

Gazprom also announced this week that it has booked no gas transit via Ukraine in November and will have to pay for capacity it has booked but will not use under the terms of its new transit deal signed in December 2019.

Vitrenko emphasized that Naftogaz is one of the largest participants in the European gas market. It buys large gas volumes and is directly interested in ensuring a high level of competition and full compliance with EU legislation.

“We aim to demonstrate to the German regulator that certification of Nord Stream 2 operator would significantly harm competition on the German market, as well as on the markets of Slovakia, Hungary, the Czech Republic, and Austria,” he noted.

The chairman of the Naftogaz Executive Board added that there are currently a number of apparent inconsistencies relating to EU requirements.

“European energy law requires that the operator of a gas pipeline shall not be controlled by the same company responsible for production (in this case Gazprom, or to be more accurate, Vladimir Putin, who stands behind Gazprom),” Naftogaz pointed out in its statement.

“European law also requires non-discriminatory third party access to the pipeline. If you look at the essence of this legislation, it should be applied to the entire pipeline starting from its entry point on the border of the Russian Federation,” Vitrenko said.

He stressed the need for the German regulator to assess the negative impact of Nord Stream 2 on competition, not only in Germany but also in the wider European energy market.

The transit deal is important to Ukraine which earns some $2bn a year in transit fees from the Russian business of sending gas to its European customers. However, that income has already fallen from $3bn a year after the Turkish Stream pipeline came online in January, bypassing Ukraine to the south. Deals with Serbia and Hungary have diverted gas that used to run through Ukraine that now runs through Turkish Stream.

Vitrenko added that the involvement of Naftogaz in the certification of Nord Stream 2 will result in greater transparency and will make it possible to consider arguments from all sides.

“Why does this matter? Because the certification process by BNetzA can determine that the Nord Stream 2 pipeline operator does not comply with European legislation, and therefore this pipeline cannot operate commercially. The intervention by Naftogaz, if accepted, would oblige BNetzA to formally consider Naftogaz’s position and arguments. It will also mean that the German regulator is truly independent and free from undue influence from certain political forces in Germany who openly sympathize with Putin's project,” emphasized the Naftogaz CEO.

Vitrenko noted that BNetzA began the certification process on September 8, following acceptance of an application by the operator Nord Stream 2 AG. Under German law, BNetzA must decide within four months whether the pipeline should be certified and, in case of certification, which rules should apply.

Vitrenko added that the Ukrainian side has already submitted a position document to the EU during the recent Ukraine-EU summit in Kyiv, which stated the need to involve Ukraine as a stakeholder in the European Commission's assessment of the Nord Stream 2 certification process. Naftogaz is closely coordinating with the Ukrainian government to maximize the involvement of all possible instruments to protect the interests of Ukraine.

Turkmenistan: A strong and stably economy