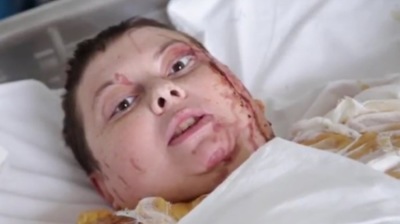 Kateryna Handziuk had sulphuric acid poured over her head in an attack believed to be connected to her anti-corruption work
By Ben Aris in Berlin November 5, 2018

Civil rights activist Kateryna Handziuk, who was attacked with acid earlier this year, died of her wounds on November 4 in a case that has touched a nerve in Ukraine.

The 33-year-old advisor to the mayor of Kherson and acting manager of the city executive committee was doused with sulphuric acid outside her home in the summer. With 40% of her skin burnt by acid, Handziuk was taken to hospital where she made a series of stirring video statements from her sickbed. In one message she said: “I know I look bad but affairs in the Ukrainian police and prosecution look even worse”.

“Protesters are demanding the prompt and effective investigation of criminal cases of physical attacks on activists and a public report on the progress at every stage of the investigation. They also hope that the president will finally admit there is indeed a problem and take it under his personal control. 55 attacks on activists in one year is a lot. Whether those were cases of revenge, attempts to prevent their work or a planned wave of violence, Ukrainian authorities should address those issues and not let Ukraine become a state where being an active citizen means your life is in danger,” bne IntelliNews columnist Kateryna Kruk wrote in an opinion piece in September.

Killings of civil rights and anti-corruption figures have become increasingly common as the authorities have been dragging its heels on stepping up the fight against corruption. President Petro Poroshenko has overtly resisted international donors’ demands to set up an anti-corruption court (ACC), which has been a key demand and linked to the distribution of more aid to Ukraine by its donors. As Kruk pointed out in her op-ed, the killings of civil rights activists have reached alarming proportions.

“Handziuk death comes amid wave of attacks on Ukraine's activists; 55 unsolved cases since 2017. Poroshenko-appointed Prosecutor-General Yuriy Lutsenko said activists are to blame b/c they "stir up" an "atmosphere of total hatred toward the authorities”,” Christopher Miller of RFE/RE tweeted on November 4.

On July 31, the same day as Handauik was attacked, another civil society campaigner was shot dead in the Ukrainian regional city of Berdiansk in a killing police think is related to his anti-corruption work in the region. Police arrested several suspects after Vitaliy Oleshko, a Donbas war veteran and civic activist, was murdered in broad daylight. They have not established a motive, though his murder is widely believed to be related to his anti-corruption efforts against the city council leadership.

The attack and now death of Handziuk have struck a cord with regular Ukrainians, who have seen their standard of living plummet thanks to the government failure to fulfil on the promise of the Euromaidan protests.

Ukraine was recently ranked at the poorest nation in Europe by the International Monetary Fund (IMF) on a per capita GDP basis, which stood at $2,964.193 in 2018, according to October's update of the World Economic Outlook published by the IMF.

Moreover, another recent poll found that Ukrainians believe that domestic corruption is a bigger problem for the country than its war with Russia, according to a recent poll by Texty.org.ua. The poll found that 78.9% of Ukrainians think corruption is among the most serious problems for the country, compared with 55.1% that believe war is a serious problem. Finally, some 85% of the population think the country is headed in the “wrong direction.”

A spontaneous group of 1,000 people gathered in front of the ministry of internal affairs’ HQ in Kyiv to demand justice for those who ordered the attack on Handziuk. Currently only five executives have been arrested and charged in connection to the attack while the perpetrator remains at large.

President Poroshenko has called to unite efforts and investigate the murder of Handziuk.

ALACO DISPATCHES: What lies behind oligarch impunity in Ukraine