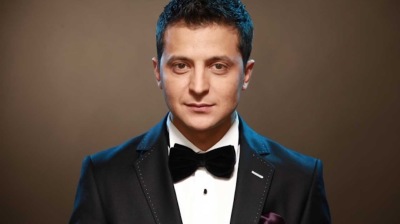 Volodymyr Zelensky, a comic who plays the role of a spoof president in a Ukrainian televised show, has unexpectedly become the favourite to win the nation's presidential elections in March, according to two new credible polls released on January 31.

Among decided voters, Zelensky has 23.0% support, compared to 16.4% for President Petro Poroshenko and 15.7% for ex-PM Yulia Tymoshenko, according to a poll conducted among 11,000 respondents between January 16 and 29 by the Kyiv International Institute of Sociology (KIIS), the Razumkov Center and the Socis Center for Social and Market Research.

Zelensky’s lead was confirmed by a second poll released the same day. Among decided voters, Zelenskiy has 19.0% support, compared to 18.2% for Tymoshenko and 15.1% for Poroshenko, according to the Rating Sociological Group, which conducted its survey among 6,000 respondents between January 16 and 24.

At the same time, about 14.4% remain undecided, compared to 20.9% in Rating’s December poll. Both polls indicated that more voters now believe Zelensky has a legitimate chance to become president.

Zelensky, a close associate of controversial Ukrainian oligarch Ihor Kolomoisky, was officially registered as a presidential candidate by the nation's Central Election Commission (CEC) on January 30. The comedian was nominated by his newly-created party The Servant of the People.

"The candidacy of comedian Zelensky is no longer a joke," Zenon Zawada at Kyiv-based brokerage Concorde Capital wrote in a note on February 1. "His [...] surge in the polls comes as a shock to Ukraine’s establishment, turning the entire election landscape upside down."

The January polls indicate that Zelensky is getting the major portion of undecided voters, who see nothing positive in the establishment candidates, Zawada added. "It appears that many Ukrainians were waiting for Zelensky to officially declare his candidacy — which he did on national television on New Year’s Eve — before voicing their support. It also appears that Ukrainians are so dissatisfied with their elites that they’re willing to trust an actor with no political experience, who merely plays the role of a noble, responsible president."

Zawada believes that Zelensky’s candidacy creates "enormous" destabilisation risks for the country. "We had the view that Poroshenko would have been able to 'massage' the election result to win given that Tymoshenko was his only main rival. He won’t be able to do that so easily with two competitors who have enough support between them to challenge vote manipulations and organise mass protests," the expert added.

Zawada also wrote in the note that Russia will also be looking for opportunities to take advantage of election-related chaos. "These tensions are further heightened by Poroshenko being anathema to either Tymoshenko (his long-time enemy) or Zelensky (backed by rival oligarch Kolomoisky) becoming president."

Last week, Zelensky disclosed the main points of his election programme, according to which the candidate is going to hold a referendum on the country's joining Nato. "Ukraine's progression to Nato and other security alliances is a guarantee of our safety, in which I believe and which should receive confirmation by means of a referendum,"the document reads.

The army should be "a prestigious service, where the skills and knowledge obtained would be successfully used in the real sector of the economy as well," and the budget for the army should stop being a "feedbox" for "cabinet generals", but provide adequate service conditions and development for serviceman instead. "My objective is to ensure that servicemen's salary is at the level of the Nato standards," Interfax news agency quoted Zelensky as saying in his programme.

"Law enforcement agencies should cease economic pressure on the business community and return to fulfilling their proper duties of ensuring security of citizens. It's time we restore trust in law enforcement authorities which we cherished in the beginning of the reform. The SBU [Ukrainian Security Service] will not deal with economic crimes," the candidate added.

Zelensky is also going to introduce a one-time "zero tax declaration" for businesspeople who declare and legalise their incomes.