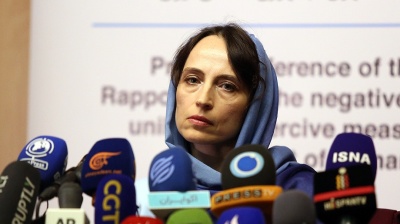 Alena Douhan at a Tehran press conference on her findings. / ILNA
By bne IntelIiNews May 19, 2022

In early May, Alena Douhan, the UN special rapporteur on the negative impact of unilateral coercive measures on the enjoyment of human rights, arrived in Iran. It was the first time that Tehran had allowed a United Nations special rapporteur to visit the country since 2005. On May 19, Douhan issued findings from her 12 days spent assessing the impact of the heavy sanctions imposed on Iran. She didn’t hold back.

“I am gravely concerned about the life-threatening consequences of the high costs and in certain cases complete absence of specialised medicines and medical equipment due to sanctions-induced trade and financial restrictions, as well as due to reported foreign companies’ reluctance to supply these goods for fear of consequences, including possible criminal prosecution and financial penalties,” the UN human rights expert said.

“Sanctions imposed on Iran’s key economic sectors, and designation of its financial institutions, along with numerous national companies has led to a severe drop of State revenues, inflation, growing poverty rates, and scarcity of resources to guarantee the basic needs of those most in need,” added Douhan, a Belarusian, who held a televised press conference on her conclusions in Tehran.

Douhan noted in the media briefing that inflation—running at around 39%, officially—was out of control in Iran, adding that growing poverty levels combined with depleted state resources for dealing with the basic needs of citizens on low incomes and other vulnerable groups. She specified those vulnerable groups as “those with severe diseases, disabled people, Afghan refugees, women-led households and children”.

The official added, “sanctions have been substantially exacerbating the humanitarian situation in Iran.”

Douhan, who has visited repressive states including Venezuela, Zimbabwe, and Qatar, has her critics. She has been accused by human rights activists of playing into the hands of authoritarian governments and promoting their propaganda.

Her analysis, however, determinedly makes the case that vast swathes of a country's economy and society can face debilitation in the face of a major sanctions attack.

In a statement, the special rapporteur went on to specify numerous areas impacted by the combination of unilateral sanctions and overcompliance, including but not limited to the preservation and further development of essential infrastructure; the difficulties to expand social support programmes in the context of rising prices and unemployment rates, including in support of the growing population of Afghan refugees; impediments in the business and industrial development due to absence of raw materials, inability to process international payments, and restrictions in accessing new technologies; deterioration of environmental security; challenges regarding natural disaster prevention, response and recovery, due to the bans of imports of specialised equipment and humanitarian provisions; rising challenges in the operations of international and local non-governmental organisations and humanitarian actors; obstacles to Iran’s engagement in international cooperation, including in the academia, arts and cultural heritage, sports, and its overall engagement with international organisations and associations due to travel bans and the inability to process payments of membership fees.

Iran’s clerical regime has in recent weeks faced a growing number of protest actions, including from teachers and bus drivers, partly driven by economic hardship.

The authorities have—at least for now—seemingly managed to limit and largely quell the food price hike protests that in the past week spread to at least seven provinces of the country, according to The Farda Briefing, published by RFE/RL on May 18. In some places, the demonstrations morphed into anti-government protests fuelled by the country’s economic crisis.

Tehran officials were reportedly attempting to break a strike by bus workers that has hampered transportation in the capital and, according to RFE/RL, threatened to merge with the anti-government protests that call for the end of Iran's clerical regime.