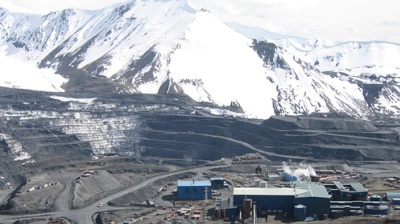 Kyrgyzstan's populist Japarov administration has seized control of the mine high up in the Tian Shan mountains near the Chinese border. / Centerra Gold.
By bne IntelIiNews July 23, 2021

The US Bankruptcy Court has ruled that the government of Kyrgyzstan is in contempt of court for continuing with its local legal action against Kumtor Gold Company (KGC), a subsidiary of Toronto-based and NYSE-listed Centerra Gold. The latter controlled the country’s flagship gold mine, Kumtor, until the populist Japarov administration seized it in May.

The Kyrgyz government resurrected several previously settled alleged tax and environmental complaints in relation to Kumtor gold mine prior to the seizure.

The tactics deployed by strongman President Sadyr Japarov to wrestle the mine from Centerra’s hands have been especially aggressive and have shocked foreign investors. So much so that the British government, with a cold eye on the fact that UK-based BlackRock Investment Management holds a 10.6% stake in Centerra, in late May lined up with the Canadians in warning Kyrgyzstan that measures that “negatively impact trade and foreign direct investment will further undermine already fragile economic livelihoods of the Kyrgyz people”. The International Monetary Fund (IMF) in June called for a “speedy and transparent” resolution to the dispute between Kyrgyzstan and Centerra  over the Kumtor gold mine.

“I am ruling that there is a violation of the automatic stay by the Kyrgyz Republic,” she reportedly said in a 115-page transcript of KGC’s emergency motion to enforce the automatic stay of prosecution globally, previously afforded to the company by the same court.

Beckerman was also reported to have noted in her ruling that “the proceedings that are going before the courts in the Kyrgyz Republic do appear to have an impact on the automatic stay that’s in place here and do appear to be violative of it in numerous respects”, adding that the injunction in the Kyrgyz court “infringes” on KGC’s rights to take specific actions during the Chapter 11 proceedings.

According to the amended notice of arbitration, Kyrgyzaltyn conspired with the Kyrgyz government to seize control of the mine—located in the Tian Shan mountains more than 4,000m (14,000ft) above sea level and 60 kilometres from the Chinese border—using the guise of temporary ‘external management’. It appears to be continuing to act at the government’s instruction in terms of the Kumtor operation and its shareholding in Centerra, the company has alleged.

Since the seizure of the mine, Centerra’s Kyrgyz subsidiaries have filed for Chapter 11 protection. Centerra has also sued the new external manager of the mine, alleging that while he served as a director, he conspired to steal the asset from the company.

Centerra said at the time, KGC and the Kumtor Operating Company were solvent, with total assets above $1.1bn and no external bank debt.

US charges Iran operative with plotting to kill former Trump hawk John Bolton
31 minutes ago
Ukraine will receive $5.5bn in support from the US later this month
15 hours ago
John Malkovich to turn Skopje into Hollywood of the Balkans
15 hours ago
Envoy says start made on construction of Turkish attack drone factory in Ukraine
1 day ago
Huge explosion rocks Russian airbase on the Crimean peninsula
1 day ago