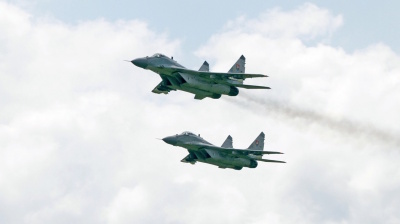 Poland proposed to move its Soviet-era MiG-29 planes to the US’ military base in Ramstein, Germany, so that they could be sent to Ukraine.
By Wojciech Kosc in Warsaw March 9, 2022

A proposal by the Polish government to move its Soviet-era MiG-29 planes to the US’ military base in Ramstein, Germany, so that they could be sent to Ukraine is “not tenable”, the US Department of Defence said on March 8, pouring cold water on Warsaw’s idea, which was apparently not consulted in-depth with Nato allies.

The proposal came in the wake of Ukraine’s President Volodymyr Zelensky’s pleas to provide his country with planes to fight the Russian aggression, now about to enter its third week.

But Nato has been wary that direct supply of major-grade weaponry could escalate the conflict and engulf the alliance in a war with Russia, which possesses nuclear weapons.

“Poland's proposal shows just some of the complexities this issue presents. The prospect of fighter jets ‘at the disposal of the Government of the United States of America’ departing from a US/NATO base in Germany to fly into airspace that is contested with Russia over Ukraine raises serious concerns for the entire Nato alliance,” Pentagon Press Secretary John F. Kirby said in a statement.

“It is simply not clear to us that there is a substantive rationale for it … we do not believe Poland's proposal is a tenable one,” Kirby added.

“To my knowledge, it wasn’t pre-consulted with us that they planned to give these planes to us … I think that actually was a surprise move by the Poles,” Nuland told the US’ Senate Foreign Relations Committee.

Poland received backing from the UK, which said that it would support a decision to hand over the 28 planes to Ukraine, although it could come with consequences, British Defence Minister Ben Wallace told Sky News.

"Poland will understand that the choices they make will not only directly help Ukraine, which is a good thing, but also may bring them into direct line of fire from countries such as Russia or Belarus," Wallace said.

Poland said on March 8 that it was "ready to deploy – immediately and free of charge – all their MIG-29 jets to the Ramstein Air Base and place them at the disposal of the Government of the United States of America.”

Poland also requested the US to provide it with “used aircraft with corresponding operational capabilities” and, in a reference to Bulgaria and Slovakia, called on other Nato Allies – owners of MIG-29 jets – “to act in the same vein.”

Bulgaria has rejected Poland’s proposal, fearing retaliation from Russia. Slovakia said earlier this month that it would not offer its MIG-29 fleet to help Ukraine either.

Poland buys 32 helicopters from Italian producer Leonardo
Polish CPI surges to 15.6% y/y in June
US and Chinese slowdown will tip the world into recession, says IIF