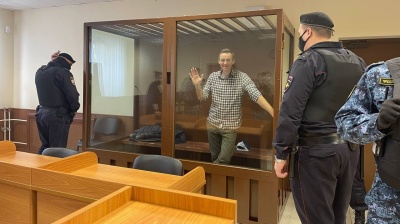 Alexei Navalny has been sent to a Russian penal colony for two and a half years.
By bne IntelliNews March 3, 2021

The US Department of the Treasury’s Office of Foreign Assets Control (OFAC)  updated its Specially Designated Nationals and Blocked Persons List with a number of Russian officials and state defence companies on March 2.

As reported by bne IntelliNews, the administration of  US President Joe Biden was expected to introduce new sanctions against Russia for the jailing of dissident Alexei Navalny this week.

The US sanctions will also be introduced against three state defence research institutes (27th and 33rd research centres of the Defence Ministry, the Institute of Organic Chemistry and Technology). Exports of defence technologies will be banned for 14 institutions (nine Russian, three German and one Swiss).

The sanctions are being expanded under the 1991 Chemical and Biological Weapons Act, already imposed in response to the chemical attack on the former spy Sergei Skripal and his daughter in the UK in 2018.

The US co-ordinated its package of Navalny sanctions with the EU.

"The tone and substance of our conversation with Russia, and our conversations about Russia, will be very different from what you saw in the previous administration,” one unnamed senior official said, as cited by the Guardian.

As followed by bne IntelliNews, the European Union remains divided over what to do with Russia over Navalny, and the majority of states are sitting on the fence; harsh sanctions were not expected to emerge from the meeting by insiders.

While the sanctions were light and largely symbolic, the Kremlin is expected to respond after Russian Foreign Minister Sergei Lavrov laid out new rules of the game in February, saying Russia would no longer tolerate any sanctions or punishments of any kind.

“The principle of reciprocity in diplomacy is still there and there will be a response,” Lavrov said at a press conference on March 2.

This round of sanctions was specifically provoked by the jailing of Navalny; however, more sanctions are expected as the US deals with other issues like the alleged SolarWinds hack by Russia and the construction of Nord Stream 2 gas pipeline.

Markets shrug off the new sanctions

The Russian stock market failed to respond to the sanctions announcement, closing trading up 0.66% on the day with the RTS index climbing to 1,452, as it recovered most of the ground from last week’s global emerging market correction.

And the ruble gained 1.2% on the day, strengthening to RUB73.8 against the dollar as traders breathed a sign of relief that a tit-for-tat sanctions war is not about to break out. Economists say that the ruble is currently undervalued by some 5%-9%, depending on various estimates, and that its fair value is closer to RUB68 to the dollar.

The ruble fell to touch on RUB80 to the dollar last year due to a toxic mix of falling oil prices, an economic slowdown caused by the coronavirus (COVID-19) pandemic and rising geopolitical tensions as it became clear Biden was going to win the US presidential election.

More recently, the ruble has decoupled from oil prices and got stuck at around RUB74 despite oil’s almost $10 gain in price, held back by fears of new sanctions. Many economists are predicting if the situation does not escalate the ruble will make further gains and could end this year at RUB70-RUB72 to the dollar.

"Due to the already extensive sanctions in place against Russia, many of the new ones should have no real impact," Sova Capital wrote on March 3.

Depending on how the second round is applied (presumably in June), further restrictions could lead to bans on exports and direct flights, as well as to a downgrade in diplomatic relations, the analysts warn.

The worst material impact might come from US investors being banned from participating in the sovereign debt market, Sova analysts remind. These concerns raised the risk premium in the FX rate and added about 11% (RUB7) of the geopolitical risk premium to the RUB/$ exchange rate, which Sova sees as "more of a risk than the baseline scenario".

Attack on Czech arms cache in 2014 killed two and led to the evacuation of a wide area.

Podgorica asked the EU to help it repay a loan to China’s Exim Bank taken out to pay for the construction of the first priority stretch of the Bar-Boljare motorway.

Romania’s new government rolled back a costly 40% pensions hike that would have prompted rating agencies to downgrade the country to junk.

Ukrainian President Volodymyr Zelenskiy called for a summit with Russian President Vladimir Putin and for the restart of the four-way talks under the Normandy Format during a trip to Paris.