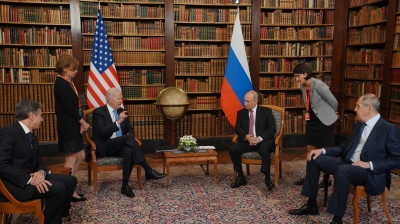 US President Joe Biden and Russian counterpart Vladimir Putin met in Geneva in June.
By Ben Aris in Berlin August 17, 2021

The Biden administration has put Russia’s “market economy” status under review in a move that revives a weapon not used since the 1990s to punish Russian trade.

The “market economy” designation is important as without it the US can impose special duties on exports from Russia to the rest of the world that could be more painful than the blunt weapon of sanction bans as the duties cost money and can make exports uncompetitive.

In the 1990s, the US refused to grant Russia market economy status arguing that the state subsidised energy and other inputs into the production of goods that in effect were part of a pseudo-centrally planned economy that gave Russian goods an unfair advantage, thus duties were a levy to counteract the artificial prices of Russia’s goods.

By reviving the market economy status weapon, Washington is partly admitting that the sanctions regime, imposed in 2014 following Russia’s annexation of the Crimea, has been largely ineffective and that it has run out of things to sanction that won’t boomerang back and hurt US businesses as well. The Biden administration is looking to expand its toolbox in dealing with the “Russia problem” and duties attached to the lack of market economy status looks like they could form an extensive and more effective tool.

Washington has treated Russia as a market economy since 2002, when it awarded the designation as a recognition of Russia’s economic and political transformation during the 1990s. Russia and the US enjoyed convivial relations in the first few years of Russian President Vladimir Putin's time in office, but things soured rapidly after the US withdrew from the ABM treaty in 2002 and then Putin caused an international scandal by arresting oil tycoon Mikhail Khodorkovsky in 2003.

If the market economy status is revoked then the US can impose anti-dumping import duties and penalties, which the US can levy against Russian exporters. Russia said it unlocked an additional $1.5bn in trade after it won the highly-prized designation awarded in 2002, reports the Moscow Times. It also paved the way for Moscow to join the World Trade Organization (WTO) in 2012 after a 15-year wait. The WTO mandates the maximum rate of import taxes which members can charge each other on different sets of goods. It is not clear if the US can imposed the new duties if both countries are members of the WTO, and Russia will be certain to bring a complaint against the US with the WTO’s conflict resolution body should anti-dumping duties be imposed. However, the WTO has no real powers to enforce its rulings should the US dispute its conclusions.

Only 11 countries in the world are still currently designated as non-market economies by the US, including China, Vietnam and nine ex-Soviet republics.

The sweeping consultation was triggered by a complaint from an Oklahoma-based company which claimed some Russian fertilizers — almost $1bn worth of which are sold to the US every year — are “being, or are likely to be, sold in the United States at less than fair value … and that such imports are materially injuring and threaten to injure an industry in the United States,” according to a statement published in the US government’s Federal Register and cited by the Moscow Times.

No decision has been made and the process is still at the level of a probe into the complaint. Among the issues the investigation will consider are: the convertibility of the Russian ruble, government ownership of companies, labour laws and wage settlements, state control over the allocation of resources as well as the status and role of foreign investment and corporations in Russia.

When calculating the anti-dumping tariffs to be levied against firms from non-market economies, the US selects baseline production prices from a third country to estimate the market cost of the product. This is seen as a more stringent interpretation and can result in higher penalties than for market economies, where the US uses the country’s own production costs.

Washington argues that in non-market economies, the extent and complexity of state support given to domestic producers is so “pervasive,” that it is “impossible to establish” an accurate market price.

Russian exports to the US totalled $24bn in 2020 — the vast majority of which were industrial products and hydrocarbons.

Despite the country’s controversial privatisation drive in the 1990s, Russia’s economy remains heavily dominated by the state and state-controlled businesses. Alexei Kudrin, a long-serving former finance minister and now head of the Audit Chamber, recently lamented how only four of the country’s largest 10 companies were privately-held, and said that only 25% of Russia’s privatisation plan had been completed.