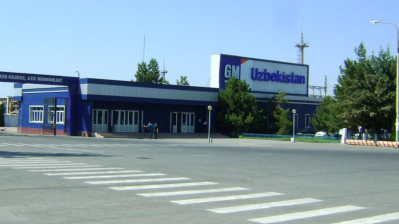 The auto plant in Asaka, eastern Uzbekistan, prior to its transition from GM Uzbekistan to UzAuto Motors.
By Alisher Kalandarov in Tashkent October 30, 2020

UzAuto Motors is considering a $300mn eurobond issue, according to data published on Uzbekistan’s Unified Portal of Corporate Information on October 30.

“We are pleased to inform that UzAuto Motors is currently considering expanding its funding options through the issuance of eurobonds in 2021,” the company said in a statement.

If issued, the bonds would be USD-denominated with a maturity of 5-7 years, it added.

Legal counsel hired for the envisaged issuance would be responsible for liaising with the London Stock Exchange (LSE) from December, according to the provided information.

State-controlled UzAuto Motors, formerly the GM Uzbekistan joint venture and before that Uz-DaewooAuto, is the largest car manufacturer in Uzbekistan. It produces passenger vehicles under the “Chevrolet” brand in alliance with General Motors.

The company, which features in the Mirziyoyev administration's privatisation plans, has an annual production output of 300,000 vehicles and an yearly turnover of more than $4bn-equivalent.

Pros and cons of joining EEU for Uzbekistan

Uzbekistan’s possible accession into the Russia-led Eurasian Economic Union (EEU) has been a question debated within and outside the country for two years. Membership would carry clear benefits and ... more

Doubly landlocked Uzbekistan is increasingly expressing an interest in using Iran’s sole oceanic port, Chabahar, as a trade gateway that could help it expand to new overseas markets. The issue was ... more

Which foreign brands managed to get started in Uzbekistan during gruelling 2020?

It’s an understatement to say that 2020 proved a gruelling test for the whole world. In business, enterprises often had to switch to experimental approaches or total restructuring of processes to ... more